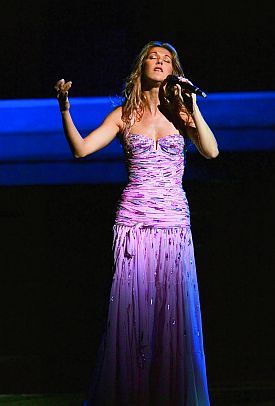 Celine Dion redefines the headliner show with the production of "A New Day." The show was created for her under the direction of Franco Dragone, formerly with Cirque du Soleil, and he, along with his team, has created a visual spectacular around Celine and her music. The show plays inside the Colosseum theatre at Caesars Palace Hotel and Casino. With the theatre, the music, the performers, and the spectacle, it is an experience and a journey like no other show on the Strip and raises the bar and the expectation of future shows in the valley.

The experience begins as soon as you enter the theatre. The Colossuem theatre is spectacular. Especially built for this production, the theatre holds 4,000 audience members, and yet boasts that no seat is more than 150 feet away from the stage. A combination of both contemporary and classic styling, the theatre frames the production beautifully, and even though the space is large and imposing, it never seems to lose a light-heartedness or a sense of humor.

The mammoth LED screen at the back of the stage, upon which many of the scenic elements are projected, becomes and additional character of the production itself. It is used and utilized throughout the production for creating mystical spaces and places, magnifying the action on stage, and even for audience interaction. The variety of ways in which this screen is used is always stunning and surprising.

The cornerstone upon which all of this has been built, of course, is Celine Dion. She brings her magic, her music, and her charisma to the stage. Her voice is perfect, and her interaction with the audience is inspiring. She is a performer that seems energized by crowd, and the more the audience was with her, the more she seemed to give. It is easy to see why this woman has become such a huge name in the musical world.

The group of artists and performers that surround Celine are incredible. They dance with precision and energy, and they float and fly with unnatural abilities. They keep the show grounded in humanity and keep the show from being just a technical showcase.

Supporting and backing up the production are the musicians. They are rarely seen but always appreciated. The group is tremendous and first rate...just like everything else in this production. At their introduction, it is wonderfully surprising to find that they had been in and amongst the production the entire time...just another instance of the magic of theatre.

There are times, however, that there seems to be two separate productions going on. There is Celine Dion performing, and there is the production that is going on behind her. The two seem to only rarely interact, and you often have to choose which show that you are going to watch.

The production is such that you don't have to be a fan of Celine Dion to appreciate the show...but it certainly helps. The non-Celineophiles in the crowd may find the production tedious at times.

Everything about this production is amazing, both technical and artistic. The production and production values are all top notch. The musicians, the dancers, the technicians, and of course the star, Celine Dion are all wonderful, and they have created a spectacle that redefines the "headliner" experience.