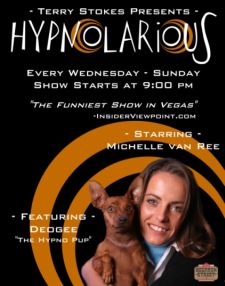 "Hypnolarious" is playing inside the Bourbon Street Hotel and Casino. It is always amusing to watch "normal" audience members, relatives, and friends get up on stage, of their own free will, and make complete idiots of themselves. "Hypnolarious" is a hypnosis show that is a lot of fun and has several solid laughs. The star of the show is Michelle Van Ree, who took over the job from mentor Terry Stokes, and Van Ree does a good job leading the audience through their hypnotic bits. The show is a much kinder, gentler production when it comes to the world of hypnosis shows. There is generally, the tendency to abuse the volunteers from the audience and get them to walk a line of decency, which most members will regret in the morning, but this is not the case with "Hypnolarious." Van Ree always treated these volunteers as people rather than as her own little automatons, and while she flirted with the risqué, she never crossed the line into degradation. Van Ree is unique in the world of hypnosis. First of all, she is a woman--a nice break from this male dominated field of entertainment. Secondly, she didn’t have the pretentiousness that plague most hypnotists. Van Ree is charming and personable, and the feeling was much more of a friend doing parlor tricks for the fun and enjoyment of it all; rather than the, "I am the master, and you are my puppet" atmosphere that most hypnotists create. Van Ree had been Terry Stokes’ assistant for many years, and he trained her for this show. It is certainly a boon for her (and us) that she has gotten to take over this show on her own. The other gimmick in this show is the introduction of "the hypno pup," Deogee. The dog is cute and is worked into the act by apparently giving the audience volunteers hypnotic suggestions. The value of the dog in the act is questionable, but it does give the show a unique hook. Another disadvantage to the production is the showroom itself. As I have said in many previous reviews, this showroom is not a showroom at all. It is a curtained off area of the casino with awkward seating, bad lighting, and low ceilings. Tall people flirt with hitting their head on the top of the proscenium opening and asking for silence from the audience is almost a joke since the sounds of the casino can clearly be heard. Van Ree is the best female hypnotist in Vegas...and not because she is the only female hypnotist, but because she has worked hard and earned the title. She commands and leads this show well. She keeps everything fun and quick paced, and of all the hypnotist shows in town, this is one that I would recommend.