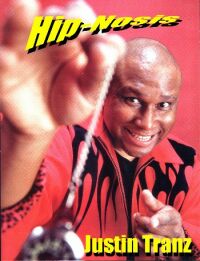 "Hip-nosis: Playing with your Head," staring Justin Tranz, is playing at the Congo Room inside the Sahara Hotel and Casino. It is a hypnosis show that is fun and amusing...once it finally gets started, but then the show moves very quickly through a hilarious series of hypnosis induced antics. Hypnosis shows, in general, are always a bit uncomfortable for me...laughing at people doing crazy things that seem beyond their control. Maybe it’s a lack of understanding, or a stunned awe that someone could be so completely manipulated. I understand that we oftentimes live in a sheep-like society and believe whatever we are told, but I don’t like the idea of giving up that much control over one’s own free will and entering into a puppet/master relationship…On the other hand, Tranz is only working with willing participants, and they get exactly what they are asking for. So as long as it’s not happening to me, and everyone is up there of their own volition, I can relax, sit back and enjoy the ride. Before the show actually starts, the audience is shown a video--something to amuse us, and something to tell us a bit about Tranz, himself. The clips of his show in other venues gives away his best jokes, and the clip showing us Tranz’ two million dollar home, shows us that he has been successful, but these clips don’t really enhance the evening. Before we get started with the "hip-nosis" part of the evening, Tranz comes out and does a pretty good job of warming up the audience. Tranz has lots of charisma and loads of personality, and he relates to the audience very well. This warm-up allows him to encourage people to get up and volunteer as well as entertain us and put us in the mood for the night. The success of any hypnosis show depends on the number and the quality of the volunteers. A big testament to Tranz is that even with a less than full audience, he had the stage lined with volunteers. With the volunteers in place (and me safely in my seat) I was able to set aside any personal bias and just enjoy the show. Tranz seemed to be able to hypnotize these people faster and more completely then in other hypnosis shows I’ve seen, and without having to go back and re-hypnotize anyone, the pace and the flow of the show was excellent. The insanity of what ensued was hilarious. The Congo Room at the Sahara is a nice space for the show. It is intimate and comfortable...the temperature of the space seemed to fluctuate dramatically---I’d suggest wearing layers. Tranz’ show worked well in the intimate theatre and the audience could really feel involved with the show. "Hip-nosis: Playing with your Head" is one of the better hypnosis shows that I’ve seen. Tranz does a good job with both the audience and the volunteers, and it is because of his charisma that the show works.