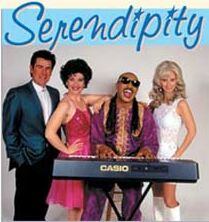 Serendipity, playing inside the showroom at the Gold Coast Hotel and Casino, is an evening filled with impersonations, a little insanity, and a lot of fun. The ensemble cast plays a variety of roles and does a decent job with most of the elements. As a whole, they are good. The show is, however, plagued with smaller elements that take away from the overall enjoyment of the night. The inexpensive ticket cost makes the show a bargain. The dinner and a show option make it a tremendous bargain. Corrie Sachs and Lori Legacy have both made the move into Serendipity from the Gold Coast’s previous show, Honky Tonk Angels. Both women are very talented and, without ever dipping into their county repertoire, delight us with a many great impressions. Both my favorite and least favorite impressions were done by Legacy. Her Connie Francis was great and certainly a highlight of the show. The Lucille Ball and Sonny & Cher routines were also top notch. Her Charo, however, was a bit of an embarrassment--now granted, Charo is a bit of a character as it is, but Legacy did a poor caricature of the character. It’s tough when the woman is a local as well. Sherie Rae Parker came to the cast from American Superstars and Legends in Concert. She performs renditions of Janis Joplin, Bette Midler, and Phyllis Diller. Bette Midler was by far her strongest character, and she was really able to show off her singing ability. The men in the cast are Bobby Brooks Hamilton and Mark Maynard. Hamilton does a great group of impressions including, Jackie Wilson, Stevie Wonder, and Little Richard. The only problem with Hamilton’s performance was his continual insistence that the audience clap along. I certainly don’t mind occasionally clapping along with a singer as they perform, but Hamilton asks us to do it for every single song, and often asks us to do it three or four times within a single song. It just about drove me nuts. Maynard did a nice Davy Jones impression, but forgot about Jones’ British accent when he talked. Maynard also performs a tremendous Frankie Valli routine, but at the end of the tribute, the stage lights are turned toward the audience…and we are blinded. I looked around to my fellow audience members, who were mostly covering or closing their eyes, or turning their heads, and it made me think of bad aversion therapy—listening to this music while being subjected to painful lighting. It seemed like a lesson in how to make a good thing bad. The showroom at the Gold Coast is a nice little space. It is a multi-use room, but the arrangement of the tables and chairs works very well for the show. The stage is small, but functional, and the lighting is adequate. For the simplicity of the room, there is a lot of entertainment. Serendipity is a nice little show that has a lot of potential. The price makes it a good bargain, and the dinner and a show package is a great value. All of the things that take away from the overall production value of the show can be easily fixed--I hope that they take the time to fix these things.