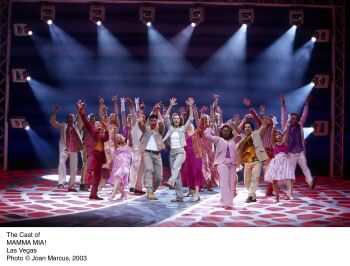 "Mamma Mia," playing inside the showroom at the Mandalay Bay Hotel and Casino, has just celebrated its fifth year on the Strip. The show has become a musical sensation around the world, and this production, which takes songs from the hit pop group, Abba, and incorporates them into a story, is a fun musical that, if you don't think too hard, can be a pleasant experience. You don't have to be a fan of the music of Abba to appreciate this musical, but it does help broaden the experience. This sadly will be the last anniversary that this production will celebrate on the Strip. The show is scheduled to close at the end of the year...so you have just 10 months or so left to see it. It is a shame because the show will more than likely be replaced by yet another Cirque du Soleil show...and as much as I like all of the Cirque shows that are around, "Mamma Mia" is at least something different.

The challenge of bringing a full-length Broadway musical to Las Vegas has always been a tough fight, but a noble one. Casino executives generally want the entertainment to bring crowds to the venue, but then want the crowd to spend as little time in the theatre as possible and a lot of time on the casino floor. If a production is too long, the fear is that the people will then just leave after the show and not drop additional money at the tables and in the machines, and the thought of a production that includes an intermission has become almost repugnant.

The folks at Mandalay Bay, though, have tried to meet this challenge. The first production in the showroom was "Chicago" which had a moderately successful run for a couple of years, and now, there is "Mamma Mia."

"Mamma Mia" is a crowd pleaser. There is really nothing objectionable about the production, the music is familiar and popular, and the story is a wedding story---always a popular topic. The show is pretty, well executed, there are no big questions, conflicts, or deep thoughts that one has to deal with; it is purely entertaining. I find the book of the musical and the characters within it rather annoying, but the music is so good that I put up with it.

The story takes place the day before the wedding and the day of the wedding. It focuses on the relationship between a mother and a daughter, and how their relationship has affected all of their other relationships. It is the search for family and finding that foundation from which we can grow and thrive as individuals.

The music of Abba has always been lively and uplifting, and the music of Abba works, for the most part, to support this story. The transition from pop hits to musical theatre has been made very nicely. Some of the songs do seem to be forced into certain slots, but not so badly that they don't work, and true Abba fans will see these an incredibly inventive new interpretations of the work.

The theatre at Mandalay Bay is wonderful. It is a well-appointed, well-executed theatre that has all of the technical bells and whistles. The scenery and lighting for the show is great, and the show is always pretty, and the seemingly simple set always offers up visual surprises.

"Mamma Mia" is a good show that will please most everyone. The cost does seem to be a bit prohibitive, and I hope that specials will be offered in the future for those that can't afford the current ticket price. It is the nature of capitalism, however, that keeps the price at whatever the market will bear, and so far, it is bearing this price.