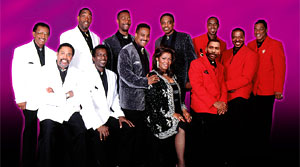 "The Platters, Cornell Gunter’s Coasters and Beary Hobb’s Drifters" are playing inside the Congo Room at the Sahara Hotel & Casino. This is a blast from the past show that brings alive so many of the hits that were made popular in the 50’s and 60’s by these groups. Every song is a memory from the past and an experience for the present. There are lots of hand clapping and ovations that fill the evening. There are a host of Platters/Drifters shows going on in Vegas currently. If someone has a good idea in Vegas, it will be imitated several times over, and this show is a good idea. It has very strong appeal in that all of the songs are familiar. It’s comfortable for people to know what they are going to get, and of the three shows of this style currently running, this one has to be the most complete overview of the songs and hits of these groups. Each group puts on a sort of mini-concert before relinquishing the stage to the next group. Seeing one group after another was a lot of fun. It put me in the mood to have the evening continue…I wanted the Drifters to be followed by the Miracles, then the Temptations, the Four Tops, etc. There were so many groups with so many hits…I just didn’t get my fill. The actual connection between these groups and the original groups is a bit obscure. How each of these sets of performers developed into these current groups is omitted. It would be nice to know, because obviously, these are not the original folks. Admittedly, I didn’t grow up with these tunes. I certainly know all of the music, and I certainly enjoy all of this music, but I still have a difficult time separating which tune comes from which group. I get my Platters, Coasters, and Drifters confused, but it doesn’t really seem to matter. It is all good music and is a lot of fun to listen to. A greater alliance and connection with this music would only deepen the experience. The Congo room is a good venue for this production. There is a good audience/performer relationship that is created in this space. No one is very far away, and there aren’t any real sightline problems. It did seem as though there were not enough microphones to go around at the end of the show. The last number is where all three groups come back on stage to perform with each other…half of them had mics, and the other half did their best to look as if they were having fun. "The Platters, Cornell Gunter’s Coasters and Beary Hobb’s Drifters" is a good show. It is a fun show--especially if you already love this music. The title is far too long, but everyone needs their credit.