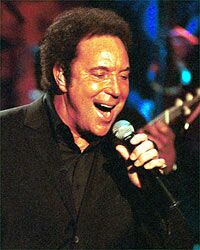 Tom Jones plays selected dates inside the Hollywood Theatre at the MGM Hotel & Casino, and he is booked there at various times throughout the year, so be sure to check listings before making plans. Tom Jones is a legend. He possesses all of the charm and charisma you'd expect of a classic entertainer...one that has stood the test of time, and one that has proven himself time and time again. Watching him perform makes you realize why he was always so great. Tom Jones is one of the great and classic Las Vegas headliners, and he still proves he is one of the best.

Tom Jones came to the United States in the sixties during the same British invasion that brought groups like the Beatles and the Rolling Stones to America. He arrived with charm, sex appeal, and a great voice. He was able to woo crowds, cause women to swoon, and entertain the audience like no one else could. He drove women crazy, and it became commonplace for women to throw their panties and hotel keys onstage. Jones first performed in Las Vegas in 1967 at the Flamingo Hotel. His show featured a partially unbuttoned shirt and tight pants...which later became part of his trademark appearance onstage.

Tom Jones is now seventy, and he is able to still do all of these things. Time has not diminished his voice, nor his sex appeal, nor his charm, presence, or personality. Crowds still flock to him. Women still swoon, and through their shared enthusiasm, women of all ages seemed to be bonding all around me. It is a truly amazing phenomenon to watch.

His show is not just for the older crowds, either. Jones does a tremendous mix of classics and modern music, which has an appeal for everyone. His voice is very dynamic, and he covers a wide range of styles in his show. He sang a lot of songs from his two most recent albums, 24 Hours and Praise & Blame...a new gospel, of all things. The songs from 24 Hours made me want to run out and buy the album.

Contemporary performers could learn a lot from Jones. His show is simple. There are no gimmicks. It is just Jones, his band, and the music. We get to see his talent without any tricks. He is an amazing performer. He sings. He dances, he moves, he tells stories, and he does it all very well.

The show is helped, of course, by the wonderful support around him. The musicians are all top-notch. The back-up singers are great, and the Hollywood Theatre at the MGM is one of the best facilities in town for a headliner. The lack of a set put the technical emphasis on the lighting---which was done beautifully. The show looked good and sounded great.

Tom Jones shows us why the great headliners were and are so great. He is still one of the best. Whatever that indefinable "it" factor is---Tom Jones has it and has never lost it. He has all of the charm, charisma, and personality that he ever did. He still possesses a wonderful voice. He's a great performer.

See him if you can.