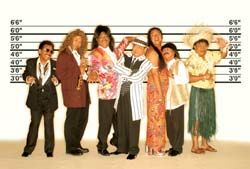 Society of Seven (SOS) with Jasmine Trias is playing inside the showroom at the Gold Coast. The Society of Seven is known as a band of wacky Hawaiian men that put on a fun show filled with music, impersonations, and comedy. This group made a name for themselves in Hawaii at the Outrigger Waikiki Hotel and have been playing there since 1969. They have had a show running in Las Vegas since 2001. It is a fun and enjoyable evening. Every member of SOS is an accomplished comedian/actor/singer/musician. It is amazing to witness the transformation of each of these people as they move from one talent to the next. As the evening wears on, the fuller and greater range of each performer more and more stuns the audience. If the group did nothing but play music--they would be a great band to which to listen...but wait, there's more. The impressions are most impressive. As you watch each performer, it is sometimes hard to believe that "this" voice is emerging out of this body. The variety of voices is oftentimes mind boggling, and the quick changes from one voice to another are awesome. The performers are always able to capture the essence of each of the people that they are trying to impersonate. The voice may not always be perfect, but certainly the essence is. Then there are the performers, themselves. They're having fun, and it's not at anyone's expense, the group simply seems to be having fun doing what they are doing. It is always a joy to watch performers enjoying what they are doing, and the more fun that they have; they more fun we have. Several years ago, SOS took on a female singer to round out their troupe. It started with Lani Misalucha--who now stars in "Voices" at the Shimmer Cabaret in the Hilton. Now, Jasmine Trias has joined the company. She was an "American Idol" finalist of season three, and she seems to fit into the group very well. In addition to performing the songs that made here notable on "Idol," she also teams up with the SOS for additional songs and comedy. She is a great addition to the SOS. The showroom at the Gold Coast seems like a good place for this group to perform. At 400 or so seats, it suits the production very nicely. Their greatest asset is their ability to reach out and connect with the people in the audience. The intimacy of the space makes it feel as if you are really a part of something. It is very much like a family having fun, and they remind me very much of the Scintas. "The Society of Seven" is a lot of fun to watch. Their show can be enjoyed on many different levels, and you can appreciate them in many different capacities--as musicians, comedians, or impressionists. The group is talented, and they're having fun. Jasmine Trias allows the group to work on an entirely new wealth of material. It's a good combination of elements. For a small, moderately priced show, it is one of the best entertainment values out there.