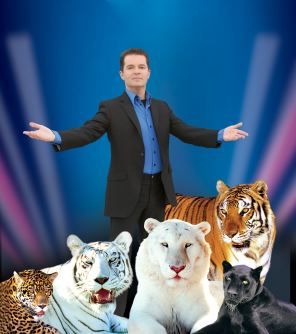 Note: Show now playing at Westgate Las Vegas.
Dirk Arthur's, "Wild Illusions," is playing inside the Starlite showroom at the Riviera Hotel & Casino. Dirk Arthur is an admired magician that has performed fairly consistently in Las Vegas for more than two decades. His show has never been one of the top magic shows in the city, but he has always been a good contender. He has a very family friendly production that has always been accessible and fun for everyone. This production includes a large variety of tricks, a couple of dancers, good music, and dramatic opportunities to witness a multitude of exotic cats. This is the only magic show left in Las Vegas that features these big cats. There is a little bit of something for everyone in the family to enjoy.

Arthur is a prop magician---meaning that he presents the illusion, but usually the assistants and the machinery do the trick; and I say this to simply define the type of magic being performed, not to make a judgment on the quality of the show. Some of our best magicians are and have been prop magicians, i.e. Siegfred & Roy, David Copperfield, etc. This type of magic, though, does all come down to one important element...showmanship, and it is here that perhaps Arthur is still in need of some work.

Arthur has always seemed to be at odds with himself. There is the feeling that he wants to be a slick magician that throws himself in the face of danger, but he comes across as your favorite uncle at a family gathering. Dirk is actually a really nice guy. He is a nice, soft spoken individual that enjoys performing magic and loves working with and raising big cats. There is really nothing "wild" about him. Part of me wishes that he would just be that favorite uncle and stop trying to be the slick magician.

All of the illusions went well. The pace was good, and Arthur did his best to keep the energy high. There is a lot to like about this production. There are, however, some disparities that drag this production down.

There is one illusion in which Arthur is chained up and a drill is threatening to impale him (a fine premise for an illusion.) The danger is the part of the trick that is supposed to engage us...but as the trick proceeds, none of the people onstage acknowledge that there is any danger...at all. The dancers dance...even when the drill is skewering their boss...no acknowledgement whatsoever. Maybe they have simply done this illusion too long, but the bottom line is that they have abandoned the basic premise of the trick...and this is just the clearest example.

This, of course, is being billed as a "new" show, but the tricks look old. This show represents a major investment...not only in the animals, but also in the illusions themselves. Would it be so tough to put a fresh coat of paint on the tricks or polish some of the metal? Take the time to freshen things up a little. It's hard enough to walk through the Riviera, which looks a bit old and dingy, itself.

Dirk Arthur's family of exotic cats is the largest collection of performing animals in Las Vegas, which include White Striped Bengal Tigers, Orange Bengal tigers, spotted leopards and Black panthers. He currently owns 14 cats and selects eight animals daily to perform in his production. His most unique cat is the rarest tiger of them all, the Pure White Snow Tiger, one of only 15 in existence and the only one to appear in any magic show in the world. Every animal was and is lovingly raised and handled personally by Dirk Arthur, including many that were born in his own endangered species breeding program.

All the animals in the breeding program, and in the illusions used in his show, were born in captivity, meaning that the limited numbers of animals remaining in the wild were not affected. Dirk Arthur hopes that one day, where and whenever possible, he can assist in re-populating these very rare creatures in their natural environments.

Along with his Bengal Tigers and African Leopards, Dirk Arthur's White Bengal Tigers and Snow Tigers are indisputably one of the Earth's most striking and noteworthy species. It is this fact that helps him greatly in his endangered species education efforts, as he diligently strives to increase public awareness.

All of his animals are under strict veterinary care, and lead healthy, happy, productive lives, receiving abundant exercise including running, playing, and swimming. You too can help by supporting the wildlife conservation laws of your state and federal government, and by supporting international programs that are working to preserve the forests, jungles, and animals of the world.

Arthur's endangered species preservation program is highly respected, and we send him tons of lauds and praises for it.

"Wild Illusions" is a fine show, but it still needs work on the little things.