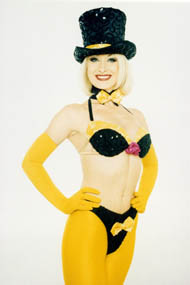 "Bottoms Up" plays inside the showroom at the Flamingo Las Vegas Hotel and Casino. It is the longest running afternoon show in town. It is the only topless show afternoon show in town. Its catch phrase is, "Laughter in the afternoon." It has been voted "Best Afternoon Show" on a couple of different occasions (in its 38 years on the Strip.) The production is a lot of things - it is also not a lot of things. The best thing about "Bottoms Up" is that it fun, cheap, amusing entertainment. This is not a big lavish show with props, sets, or anything that one might consider extravagant. It is a small show with a few cast members and a small troop of dancers. The show consists of some very bad sketch comedy routines broken up by dance numbers. The comedy appeals to the lowest common denominator. It is rough, crude, and always goes for the obvious laugh. After one especially large groaner of a bit, one of the cast members said, "Hey folks, these are the jokes. They don't get any better than this." And to his credit, he was telling the truth. The jokes really didn't get any better. A groaner, a bad pun, a cheap gag; it was all there. When you understand, however, that "this" is in fact "it;" you may as well sit back and be amused by this stupid humor. I did enjoy the dancers. Each of them was very capable and executed a wide variety of high-energy numbers that were, in fact, truly entertaining. The dance team brought a spirit and an energy to the show that helped pull us through the comedy routines. The Flamingo showroom is a great place to watch any production. One of the classic showrooms in Las Vegas, it has the charm and the amenities to make watching any production a pleasure. The best thing about the show is that it is inexpensive. The show lists at $12.95, but with a coupon, you can get in for the price of a drink. The coupons are generally passed out on the street ahead of time, but if you miss one of those people, you can ask for a coupon of the box office. The price really does make the show worthwhile. It is an amusement in the afternoon. It is a fine way to break up your day. It's cheaper than a movie, and there is some entertainment value within the production. If you attend the show with the right attitude, then the production will serve its purpose and entertain you. Don't go in looking for a classy or extravagant production. It is an amusement - a way to kill an hour in the afternoon. And please, don't pay full price.