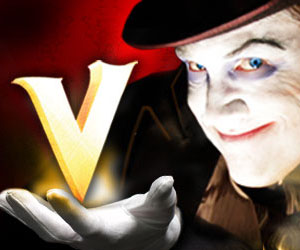 "V: The Ultimate Variety Show" is playing at the "V" theatre inside the Miracle Mile Mall at Planet Hollywood. It is a great evening that showcases the talents of some of the best variety acts in town. These are all part of the "A" list of talent that we have in our city. Many of these acts play multiple gigs---doing this show as well as other major production shows on the Strip. I have personally recommended this show to more people than any other show in town. It is simply a show that cannot miss. There will be something that everyone can enjoy in this show.

Variety Acts have always offered us a break in a regular production show. The beauty of the acts is that they are self contained, generally take up only a small amount of space, and have to immediately capture the attention of the audience. They are quick, fast-paced, and usually amazing. David Saxe first opened this show about 15 years ago at the C2K showroom inside the Venetian. It immediately struck me that this was a brilliant concept---brilliance in the realization of the obvious...why hadn't anyone thought of it before. The form and format has been duplicated and copied many times over at this point (this show opened before there were any other talent based showcases,) and still, no one does it better.

The evening moves very quickly from one act to another, and the show covers a large assortment of elements: magic, comedy, juggling, and other wonderful surprises. While the show maintains a core of people for the show, some of the acts rotate throughout the week. This allows for a greater variety in the show.

"V: The Ultimate Variety Show" encompasses and embodies the very essence of the term, "entertainment." Having been fortunate enough to see most of the shows in town, I have watched almost every one of these acts in prior productions. David has done a good job at selecting the cream of the crop. It was like watching a "greatest hits" variety show. Each of the performers does a good job at overcoming that barrier which separates audience and performer. It is part of the very nature of variety acts--each segment is fairly short, therefore, the performer must bring a high-energy performance that makes a quick connection with the audience. Without that connection, a variety act would more than likely fail. These experienced artists are all masters at seducing the audience, and none of them had problems.

A couple of the regulars are Wally Eastwood and Russ Merlin. Wally is the host for the evening, as well as, a brilliant juggler. I have seen Wally's act since his days at "The Follies Bergere." I've watched Russ Merlin's act since the days of "Showgirls of Magic." Russ's act...well, I don't know that I can describe it, but what I can say is that there is brilliance in its simplicity. I mention these two acts because both performers are masters at what they do and set the level of the performance at a very high bar. I have lost track of the number of times I've seen them perform, and yet I find their performances fresh and new every single time.

"V" is a masterful production that brought the variety act to the forefront. It shows off some of the most talented people we have in our city. It is a show that is brilliant in its simplicity. This production spawned a series of imitators, but none does them as well as "V."

You can only truly appreciate and do justice to these acts by going and seeing them. It is a fun and wonderful evening of entertainment.