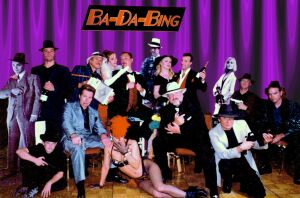 "Ba-Da-Bing," an interactive dinner theatre presentation, is now being shown inside the Ba-Da-Bing showroom at Sazio’s restaurant at the Orleans Hotel and Casino. The evening centers around a surprise party being thrown for "Mr. Big." All of the "families" (us) have signed a temporary cease-fire agreement so that the party can commence. Everyone is part of an Italian family for the evening, and every stereotypical "Goomba" and "Goodfella" character is thrown at us. There is singing, dancing, and a lot of little family squabbles that comprise this evening of entertainment. "Ba-Da-Bing" is a show that has been in search of a venue for a long time. The show has been moved on a couple of different occasions, and they have finally been able to make the Orleans their home. There are now quite a few interactive dinner theatre presentations all vying for the same type of audience, and location and advertising will make a difference. This is a show in which you must come ready to get involved. The audience's involvement is as much a part of the evening's entertainment as the actors themselves. If you are a person who likes to simply sit back and observe, then this show may not be the best choice for you. I observed one couple that obviously didn't know what they were getting into, and they spent the better part of the evening just looking for a polite time to escape. The rest of the audience seemed to really enjoy the involvement. Just like all of the actors, the more you commit to the role that you're given, the more fun and complete the evening will be. ...and the actors did commit themselves to their roles. Every actor did their best to fully commit to every aspect of their character. It was nice to see actors with that ability to walk that fine line where they lose themselves without losing their sense. It is really a rather tough distinction to make especially character types that are so outrageous. The dinner was also good. It is always difficult to find any consistent quality when you are mass producing meals, but the company and the cooks are to all be commended on their preparation of the entrees. The dinner choices included: Chicken, Steak, and Lasagna; and all of the dinners seemed to come out equally well. The room where the production took place worked only adequately. The production would be well served by adding a couple of platforms: one in the front for the actors, and one in the back for the spot light operator. Without the benefit of a stage, the audience could usually see what was going on, but could never really see well. Without a platform for the spotlight, the operator did a better job at lighting the backs of people's heads, rather than the action itself. "Ba-Da-Bing" is a fine evening of entertainment for all those who want to be a part of the entertainment experience. The meal was good, and the actors were fun.