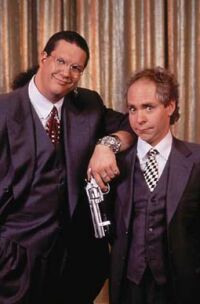 Penn & Teller are playing inside the Penn & Teller Theatre at the Rio Hotel and Casino. This pair of magicians/comedians/professional hucksters has been performing together globally for over 30 years and are now signed to an extended contract with the Rio. "This is not your typical Las Vegas show," announces Penn at the top of the production, and then for the next ninety minutes, they prove it.

The show combines elements and segments from many of their appearances and shows from the past with material that is specific with their Las Vegas home. The way that the show has been put together and presented is nothing short of brilliant. Even when everything is explained, the smoothness, ease, and speed with which these things are executed is amazing.

Upon entering the theatre, you are not only greeted by the sight of a beautiful and well- appointed theatre, but also by a class pianist and a box on the stage. The pianist entertains us as we are asked to come up on stage and inspect the box. Like many of the Penn & Teller routines, the audience is challenged to make sure that things are "supposedly" what they seem. We know that a trick is going to be done with these items, and our personal involvement heightens the enjoyment of this, their opening trick.

This "Odd Couple" of magic proceeds with Penn rambling on with an endless discourse about a variety of topics, and pokes fun at everyone and everything. Teller remains mute and cute throughout the show, getting several opportunities to showcase and astonish us on his own. The audience is continually amazed and entertained. Occasionally, the audience is "let in" on a trick, but the outcome is always the same; we are equally entertained with the knowledge as we are without it.

My favorite was the "this is not the trick you think it is" trick...because a trick is set up, and it turns out that it is not that trick, but in the final reveal, we find out that it was not that trick either...the trick was really on the audience the entire time...it was wonderful.

The show moves along at a wonderful pace right up until the last trick--the magic bullets. It is a good illusion, but the pace of this trick is completely different than all of the others. It is slow and requires a lot inspection and preparation. Additionally, if you have seen Penn & Teller onstage or on television in the last several years, you have seen this trick. We know the outcome, we know the patter, and as audience members the anticipation and surprise are gone. Because of this, the trick is a bit of a let down after having seen so many other wonderful things. It is a good illusion, but it doesn't seem to be the best way to end the show.

Penn & Teller put on a great show. It is also nice to see them acknowledge and thank their staff and crew--something many performers seem to neglect, and without the support and efforts of everyone, the show doesn't happen. Penn & Teller are both Las Vegas residents now, and so in many ways, they have come home for an extended stay. It is nice that they have found this home for their performances. It is a great show and certainly worth seeing.