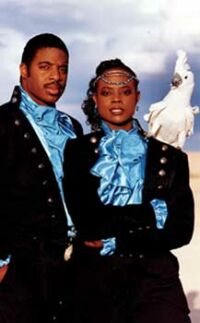 "Victor & Diamond: The Soul of Magic" is playing in the showroom at the New Frontier Hotel and Casino. It is a fun and fast paced show, and a lot more than what one can usually expect from an afternoon show at this venue. The Frontier has played host to a large variety of failed and bad magic acts, and it is with tremendous relief (and a bit of surprise) that one can finally report a good and strong showing. Victor & Diamond put on a very good family show that is certainly a rival to its contemporaries in town. This husband and wife team have been performing together for many many years and are happy to be now performing close to home--so they are very motivated to make this show work. The opening of the show captures our attention right away as Victor silently executes numerous tricks and illusions quickly and effortlessly--birds and rabbits start to emerge from everywhere. It is fun and amazing...in a way, it is also a bit disappointing because there is nothing in the show that can top this opening barrage of magic. Most of the other illusions, while certainly well executed, are very typical of most of the other magic shows in town. A bit of an odd aspect of this show--the variety act, that is used to break up the magic of Victor & Diamond, is another magician. Roy Shank: The Samurai of Soul uses his comedy to find a distinction within his magic. It felt strange to have a magician as the variety act to a pair of magicians, but I suppose there was enough of a difference to make it a worthwhile choice. Shank shamelessly works the audience to solicit some cheap laughs, and whole most of the performance worked; Shank’s fifteen minutes on stage seemed to lack a strong flow. The showroom inside the Frontier is not much of a performance space. A converted Bingo room, the space offers all types of seating: good, bad, and obstructed views. The lights and sound are decent enough, but the opening video intro is out of place and doesn’t really support the show well. Victor & Diamond have a good show on their hands. It is nice family enterta inment and will hopefully become a strong competitor in the world of afternoon magic shows.