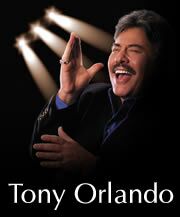 Tony Orlando is performing inside the showroom at the Golden Nugget Hotel and Casino. He puts on a wonderful show. Orlando shows us an incredible amount of energy and inspiration in this ninety minute show. Included in this production are his hits of the seventies, classic Rock and Roll, fifties tunes, tributes to America, and a couple of new songs. Orlando is extremely personable and has a presence and charm that is rarely seen. His show delivers a lot more than what one might expect. He is incredibly fun to watch and to hear. He has the ability to engage and involve the audience throughout the production. For the twenty something crowd, his songs and singing may seem like a history of Rock and Roll lesson, but for those of us that remember the sixties and the seventies, his singing makes us feel young again. One might not initially point out Tony Orlando as one of the truly significant figure in music, but in reality his songs have become icons of our society. Tying a yellow ribbon around a tree to welcome home those that have been away has become part of our cultural history, thanks to Orlando. This has led to an entire rainbow of ribbon awareness. Red ribbons, white ribbons, pink ribbons, etc. all show our alliance to a certain cause; and it all started with that simple yellow ribbon around an old oak tree. Helping out with the effort to put on a good show, is the band that is backing up Tony Orlando. They are arguably one of the best bands that I have heard in recent years. This five piece band is exceedingly talented, and they bring out the best in all of the music. They play, equally well, a diverse assortment of music. They blend well together. They are a very tight band. The showroom at the Golden Nugget suits this production well. It is a smaller showroom, and this intimacy serves Orlando very well. The showroom was built many years ago for Frank Sanatra, and the spirit of that quintessential performer seems to have been passed easily to Orlando. The space is better used than in other productions I have seen there, and the producers have done a lot more technically then what one might expect. The lighting in this show is great. The space has a lot of limitations, but it seems as if the technicians have overcome any of these obstacles. The entire show and production exceeded my expectations. That is a rare ability, indeed. The singing, the personality, the music, the lights were all wonderful. It was far better than I had hoped. It was a great night out. I hope that Tony Orlando continues to come to Vegas, because I certainly hope the see him again.