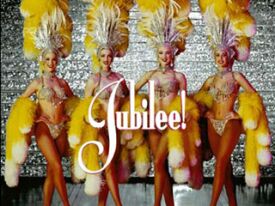 "Jubilee," playing inside the Jubilee theatre at Bally's Hotel and Casino is the last old Vegas show left in the city. It is an icon and an institution for our town and celebrates that which made Las Vegas famous. It is a "more is more" show. More girls, more sets, more costumes, more songs, more...everything! It is a Parisian-style show with a Ziegfeld touch. It is an extravaganza in the classic style. If Las Vegas is representative of excess, then "Jubilee" is representative of Las Vegas.

This show is the longest running show in Vegas and has been playing continually for more than 30 years. But the show does not show its age...it feels as fresh and as vital as ever. I went into the show with a bad attitude--thinking that the show would be a relic...I was wrong. The show was delightful. The production does feel a bit out of step with the contemporary Las Vegas, which is actually pretty terrific.

The show doesn't pretend to be anything that it's not...it is just one big production number after another, broken up by a couple of specialty acts, and everything is done well. The sheer size and scale of the sets, and the large number of cast members can be overwhelming. The excessive number of topless showgirls can be a bit daunting as well--just how many breasts can we look at in one night? (And as a guy, I would say, all of them, of course.)

The production numbers are big and pretty. The movement of the sets is very effective. Each number is an excuse to parade out an excessive number of...well, everything, and I loved every minute of it.

The costumes (at least for the women) are amazing. They are everything that one would expect of a Las Vegas showgirl--huge hats, lots of feathers, lots of rhinestones and sequins...and not much else. The men's costumes, though, are a bit less attractive. A bejeweled G-string that looks good on the women looks horrible on a man. The male costumes always seem to throw emphasis on the men's worst attributes, and while some of the men have very good physiques, the costumes are truly unforgiving.

There are several acrobatic specialty acts that break of the evening. Each of these acts is wonderful and is a welcomed break to the excess from which we sometimes get overwhelmed.

"Jubilee" is a production that is uplifting and fun. It is a glimpse into that which made Las Vegas some of what it is today and is a part of its history. The Titanic has been sinking on the stage for more than thirty years, and I hope it continues to sink for another thirty. It is a pretty show and a big show. It is not a production that tries to anything that it is not. It is truly an extravaganza.