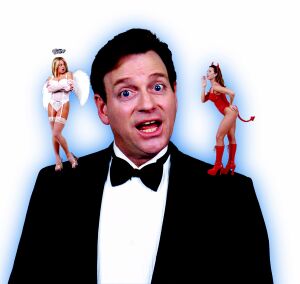 Fielding West: Comedy, Tricks, and Naked Chicks is playing at the Bourbon Street Hotel and Casino. It is a small show in a small hotel, but it offers a tremendous amount of entertainment for the price. Fielding West: Comedy, Tricks, and Naked Chicks is, first of all, probably one of the best titles for a show that I’ve heard in a long time. From the title, you can tell that this show is going to make no-bones about what it contains. It is wacky. It is fun. The nudity (or seminudity, actually) is completely gratuitous, and we don’t mind. This is not art; it is just entertainment. The show just recently opened and is still in its infancy. There are a lot of timing and transition problems as of yet, and the cast as a whole just hasn’t seemed to have found its rhythm. They are still working to solidify numbers, and they are still in the process of adding to and refining the show. The foundation, however, from which they are working is a solid one, and the show will become a strong piece for this small venue. Fielding West has been performing and entertaining audiences for years. He is considered to be one of the premier comedy magic performers of our time. It just seems natural for him to have his own show in Las Vegas. Marcy Parker and Natalie Lund are his showgirl/assistants. They are keep exceedingly busy throughout the evening: dancing, assisting, and diverting our attention. They will settle into their roles nicely. West’s long-time feathered friend and co-star, Bob the Bird, often times brings about the highlights of this production. "Bob" is introduced to us as both a character in the production, as well as functioning as a living magic prop. West seems most at ease when he is working with Bob, and thus these sections of the performance seem to go the smoothest. The performance space inside the Bourbon Street Hotel can hardly be considered a performance space at all. A corner of the casino space has been merely curtained off, and a stage has been set up at one end. The stage is small, the ceiling is low, and the audience is crammed inside. Smoking is allowed inside this space, and there is no place to hide for those that are bothered by smoke. Once the show got going, however, the shortcomings of the space didn’t seem to be a problem. Fielding West: Comedy, Tricks, and Naked Chicks is fun and entertaining, and it will be a good show. The production has a lot of bumps and stalls to smooth out, but fortunately the show has a good base from which this potential will be able to grow. I look forward to seeing the show again once these things have been worked out.