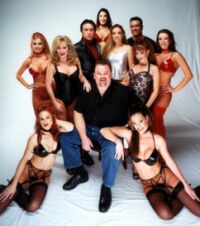 Tease, a sexy new musical comedy, is playing at the Blue Note Las Vegas. This show gives us a comical sneak peak inside the lives of a couple of strippers while they’re at work for one evening. The cast does a great job at bringing to life all of the different songs and characters. Each of the performers are exceedingly talented with the ability to act, sing, and dance.

Musical comedy is one of the mainstays of American theatre, but it is fairly unique to the Las Vegas Strip. Other venues that have attempted shows with characters, story, and script; have failed in this town--which is a pretty sad commentary on our entertainment patrons. Does a musical comedy really tax the minds of these people and give them too much to think about? I digress... The producers of Tease felt that it was again time to bring musical comedy to the Strip, and it’s not just another revival of a standard show; it’s a new show. For Las Vegas, this is considered a bold new move. I applaud these producers, not only for their efforts, but because they have done a good job as well.

A lot of things were done "right" in the production of this show. For the most part, things were kept simple--the story, the sets, the characters; and simplicity serves this show well. A story about "strippers" is fun and intriguing. It is certainly not a deep and meaningful exploration into the psyche of these people; it’s not supposed to be. It’s just fun. The simplicity of the set and the settings allow the action of the play to move quickly from one things to another. Transitions are smooth and easy. The characters are also simple and direct. Each of the actors establish their characters right away, and we can easily align ourselves with these people. By the end of the show, we like all of these people.

The songs help further the action as well as give us a better picture of each of the characters. The songs are fun and lively. Everyone in the cast has a great voice and each of them does a wonderful job.

The show does has its awkward moments: a lot of cheesy dialogue, a completely contrived ending, a lack of thought in clumsily tying up loose ends, just to name a few of them. We forgive most of that, however, because of the talented individual performances.

The space inside the Blue Note is not a bad space for this production, but it’s not a great space either. The fact that it’s a show about a club that’s held in a club is not bad, but this club is not a theatre and so there are some problems. There are bad seats in this space. If you are up too close, you will miss some scenes. If you’re off to the side, you will also miss things. In fact, the only place in which you can see everything is in the center in the back-- which, I suspect is where the director sat during rehearsals and thoughtlessly never moved.

Overall, I liked Tease. It’s a fun show to watch, and the talented performers make it all worth while. There are some problems with the show, but for the most part, we forgive these things because we’re having a good time.