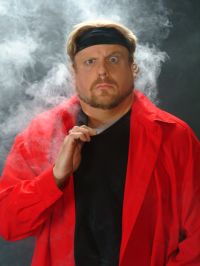 The Amazing Johnathan is playing inside Krave, which is located just outside of Planet Hollywood. His show is mostly a comedy routine under the guise of doing a magic show. His show is insane, off-color, and done mostly in bad taste---which is what makes it funny... His type of humor is not going to be to everyone's liking---you have to be just a little bit sick to really appreciate his humor, but for those that do, you will find no better outlet.

I have seen this show in every venue that it has played for almost ten years...one of the criticisms that I've had in the past is that the show has basically been the exact same show the entire time, and it has never really evolved. If you've seen the show before or if you've seen one of the comedy specials on television...then essentially, you've seen the show. This can often be a trap for a performer and cause them to get into a rut. I felt this when I saw the show three years ago. The show felt a bit perfunctory...now, three years later, the show felt very comfortable. It was fun to see the routines again...kind of like watching a rerun of a favorite sitcom. Johnathan's timing was spot on, and he made the bits feel fresh again.

The Amazing Johnathan's show is a mix of weird magical bits, humor, and abuse. With his impulsive, raw humor and abrasive wit, he keeps audiences laughing. His long-time assistant, Psychic Tanya, comes out time after time, only to be beaten off stage by The Amazing Johnathan. Most of the humor is very crude and continually teeters on the fence of tastelessness, but this fence is walked very keenly, and has brought this team the accolades they deserve. The audience is not safe at the show either. After selecting an audience member to come up on stage, that person is then part of the show, and the brunt of most of the jokes, for the next 45 minutes. Sometimes the build up to a trick is a bit belabored and gets a bit tiresome, but the payoff is usually worthwhile.

An early clue, as to what sort of humor will be the norm for the evening, comes with the video clips that precede the show. Video clips, from crude movie and television shows, demonstrate off humor that is often crass, tasteless, and gross; and is a preview as to what is to come. The success of these films, and many others like it, shows that the market is obviously there for this. There is also a video scan of the audience. Every now and then the camera focuses on a particular person, and an insulting quip is captioned underneath their photo. It's all in fun, and the audience seemed to be good sports and enjoy it for the most part.

The showroom at Krave seems to be a decent venue for the production, and Johnathan's show is the only show to ever have success in that room.

The Amazing Johnathan is an eccentric comic magician whose bizarre humor and antics have earned him widespread recognition as one of the most unique performers today. The Amazing Johnathan's show is a lot of fun for the right crowd. The humor is coarse and oftentimes gross, but it is funny in that very sick way. If you enjoy his brand of humor and audience interaction, then you should definitely get out to see him.