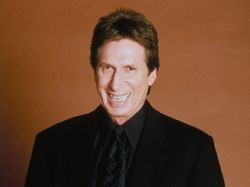 David Brenner is playing inside the newly named Shimmer Cabaret at the Las Vegas Hilton. He brings his audience an evening of very smart and topical comedy. Brenner gleans his material from headlines and stories taken from newspapers, magazines, and the Internet. Because of this, his show does modify itself and change depending on what is currently happening in the world. Brenner’s observations are delightful, and his views and perspectives on these things help us see our environment in a little better light. While other comedians debated whether to tell jokes after September 11, 2001, David Brenner terminated a forty-eight week engagement in Las Vegas to go on a nationwide tour he entitled "Laughter to The People", which has since taken him on the road every week to almost all fifty states. In his own words: "I truly believe that laughter is the best medicine and that if one can laugh, one can live. The same applies to a country and her people." It has been the most gratifying tour of his career, which is saying a lot for someone who has been making the American people laugh since 1971. Brenner has had a remarkable career. Beginning with his debut National TV appearance on The Tonight Show, where he went on to make 158 appearances, the most of any guest on the show. He has continued to be the most frequent talk show guest of any entertainer, as confirmed in "The Book of Lists #2." Today, Brenner is a regular on David Letterman and, because his act is based on "very" current events, and he is recognized as a political pundit, also he appears on news-oriented shows, like MSNBC with Chris Matthews and a slew of others on CNN and The Fox Network. Among other shows, he is also a frequent guest on Greg Kilborn, Jon Stewart, Hollywood Squares and Bill O'Reilly. Then there are the four HBO Specials he has done, including his most recent, performed live without a safety net, "David Brenner: Back With A Vengeance" which proved that once again the Philadelphia native is still "the ultimate comeback kidder." The show was one of HBO's highest rated specials and, among the glowing reviews, The Hollywood Reporter proclaimed, "He's edgier and more insightful in his skewering of popular culture than ever before …" Brenner wasn't always in front of the TV camera. Before stepping on stage, he enjoyed a successful career as the writer/producer/director of 115 television documentaries and headed the distinguished documentary departments of both Westinghouse Broadcasting and Metromedia Broadcasting. Brenner's documentary work earned him a total of nearly thirty awards and citations including an Emmy. This multi-talented man began as a kid in the poor sections of South and West Philadelphia where he was a gang leader who used humor as a powerful weapon and as a negotiating tool. From fourth grade through high school, Brenner was elected class president, as well as class comedian. He attended Temple University where, in spite of being funny, he graduated with honors, majoring in mass communications. David Brenner has three sons: Cole, Slade and Wyatt. Everything that our society has built to be sacred and dear to its hearts is fair game for Brenner's quick wit and unique insights. He has a wonderfully casual style that puts the audience at ease, and we are treated to a night of good old-fashioned stand-up comedy. It is always wonderful to see the abilities of one person being able to hold the attention of an entire audience for an evening. The comedy in his show ranges from the casual and mundane to the things that we have created to be near and dear to our hearts. We often get to look at ourselves and laugh at our own silliness.