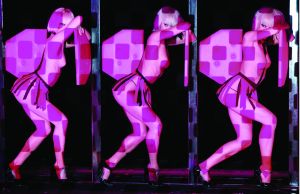 MGM Grand's, "Crazy Horse, Paris," (formerly "La Femme") made its debut in Las Vegas in 2001 at the MGM Grand Hotel and Casino, and even with critical success under its belt, the show has now recently introduced seven new numbers with additional lights, music, and costumes. This continual evolution allows the show to stay ahead of the cultural curve and remain fresh to both the audience and its performers.

This is not your typical topless show. It is much more of an artistic dance show that explores light, space, shape, and the female form. It is a mix of modern dance and modern art. These performers are dancers and not "strippers." This imported show, from the Crazy Horse Saloon in Paris, elevates the topless show to that of an aesthetic experience. There are also a couple of variety acts that break up the evening of entertainment. Each of these acts is wonderful and augments the night superbly.

The "Crazy Horse" was established and created over fifty years ago by Alain Bernardin. His concept was to create a show that would celebrate the female form and utilized these forms to create a type of modern art. During those times when you can focus on these forms, watch as the light and shadows play across these shapes, and see the projected patterns; the images that you watch on stage can be mesmerizing. You can see art in motion, and the experience is more sensual rather than sexual. If you are going to the show just for a sexual experience and to watch big breasts, you may be disappointed.

Moreover, while these are certainly beautiful women, and yes, all of their breasts are exposed, these performers are there for a higher artistic purpose than to simply jiggle for the audience. All of the dancers are members of the original Paris dance troupe. Trained in ballet, the dancers perfectly integrate themselves into the sensuous, provocative choreography as their bodies are bathed in the richly colored and textured lighting.

The numbers embody a wide range of themes and styles. There is the dramatic and sensual, the amusing, the fantastical...it is all very enjoyable to watch. There is a "datedness" about the entire production. It is certainly stuck in the form of the original, and it's not perfect...it is sometimes even stagnant. It is a shame because the dancers in the show are so wonderful, they could be doing and achieving so much more than they currently are. The minor reworking of this production addressed and fixed some of the previous shortcomings of the show, but there is still a lot more to do.

Some big changes with the production are now the use of specialty people being presented within the context of the show. Recently, Dita Von Teese performed her bathtub number as a special guest performer in the show...she was brilliant...and if they do more of that, then the show will remain fresher.

The Crazy Horse Theatre was built as a replica of the original Crazy Horse Theatre. It is a comfortable and nicely intimate space. The lighting is, of course, amazing and is part of the "Crazy Horse" signature. It adds a tremendous depth and texture to the look of the show. The lighting could often be considered the "other" performer in the production because it plays such a significant part. There are, though the huge failings of the space as well, and I wonder why those could not have been corrected in the rebuilding process.