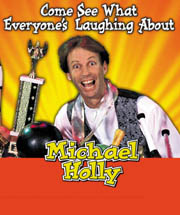 Michael Holly performs an hour of magic, juggling, improv, tightrope walking, and comedy in his "Off the Wall Comedy Hour" at the Congo room inside the Sahara hotel and casino. This afternoon show is a delightful way to spend an afternoon and escape the heat of Las Vegas. It is a true one-man show with Holly alone to entertain and amuse the audience. He does a good job, and the hour seems to slip by quickly. The primary focus of the afternoon seems to be Holly's comedy. He has a wonderfully dry sense of humor and has the ability to direct his humor to young and old alike. His quips and jokes are multi-layered and can be taken on many levels. As the children laugh, the adults can smirk at the other aspects of the jokes that are lost on the younger audience members. Holly establishes a good rapport with the audience and is quick witted enough to handle anything that is thrown to him. Holly is very capable with all of the other aspects of his afternoon performance, but rather than being the focus of the performance, Holly uses these things as tools to engage us further in his comedy. There are better jugglers and there are better tightrope walkers out there, but none that are able to incorporate these things so fully into a comedy routine. The juggling, et. al., are a means to Holly's humor; rather then an end in and of itself. The Congo room is an interesting space for the show. The room is decorated and set-up for the evening show, "The Rat Pack is Back," balloons adorn the ceiling and band instruments stand ready in the background. Holly often times looks like an intruder into someone else's space, but he certainly makes the most of it. Everything in the room, even the ceiling, becomes grist for Holly's humor mill. Upon reflection, I'm not sure that Holly's show would even work as well in a dedicated space. His show is often reminiscent of a street performer--someone that has set up in an area or space that doesn't belong to them and then utilizing every aspect of that space for the performance itself. Holly comes loaded with a lot of his own material. He gets more from the space, and then he gets the rest from the audience. The more the audience became involved, the more Holly seems to become inspired. I do encourage people to go see Michael Holly's show. It is a fun way to spend an afternoon, and it is a bargain as well. I also encourage audiences to get involved in the production--certainly the more audiences give him, the more material he will have to give you.