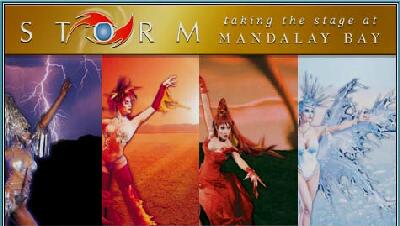 Six months ago, the production of Storm opened up at the Storm Theatre inside Mandalay Bay. The show opening had been very greatly anticipated, unfortunately, it was dreadful. In my initial review, I tried to make it clear that I felt all of the correct elements were in place; they were simply put together badly. Transitions were awkward, and there were far too many unrelated components. I urged people to check out the show after six months--if the show was going to survive then things should be fixed by then. I also took my own advise and went back. It is now six months later, and I am happy to report that things have been fixed. It's a good show. Storm has become an exhilarating, high-energy show that flows together nicely and is a lot of fun. It has been a rough six months for this production. They have suffered through a lot of bad press, bad word of mouth, numerous rumors that the show would close, and an inability to fill even a minimum number of seats. The first impression of the show was a bad one. I hope that the show can get the word out about its improved status so that they can start getting people back into the theatre. This show deserves a second look--or for many, a first look. It is apparent that all of the performers have worked very hard to improve the show and themselves. Everyone seemed to be right on target and very sharp. The dancers (both male and female) were very impressive, and it is exhausting to watch them. They are putting a lot of energy into their performances, and the dancing never seems to stop. The singers have managed to find their own style as well. It seemed that when the show opened, the singers were focusing too much on imitating the original sound of the songs, rather than creating their own performance. Six months have seasoned these performers a bit, and they now have a better feel to the numbers and can now relate to the audience better. The producers have made a lot of good choices in the continuing development of this show. First of all, the back half of the upper part of the auditorium has been partitioned off--thus creating a smaller space. People get to feel a greater connection with the show. Secondly, most of the talking has been eliminated. A good choice since previously the idle chatter did nothing to advance the show anyway. The transitions are a lot smoother. The show now moves easily from one big number to the next. The show's theme is still pretty weak, but at least it is not as cumbersome or bothersome as it used to be. Storm has a great set, incredible lights, and every bell and whistle gadget that one can imagine. Previously, all of the technology seemed a bit overbearing. It now seems to work nicely in conjunction with the production. Storm has overcome so many of its obstacles. It has been a long road for this show, even after such a short time. I was so glad to see this improved version. The show always had great potential, but it is only now that it is beginning to realize it. I'm happy for the show, and I'm happy for the performers--who I know have worked very hard to succeed. They deserve the applause and the accolades for their work.