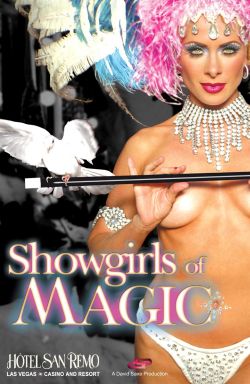 "The Showgirls of Magic" is playing at the San Remo Hotel and Casino. This is a fun and kitschy show that is unique in the entire world. It is a show that I have seen a multitude of times, and I have always left with a smile on my face. It is a pleasure to watch this group of women both dance and perform magic. The "showgirls" doing magic idea, is a good variation, which offers a lot of style and dimension to the performance of illusions. There are also a couple of additional acts that are both fun and entertaining that round out the evening nicely. Showgirls doing magic is a great concept--topless attractive dancers doing magic, as well as dancing and entertaining. It seems to be a natural--especially in Las Vegas. Each of the women is attractive, capable, and does a nice job in the execution of the illusions. They have a lot of demands placed upon them--being asked to fill multiple shoes, i.e. dancing, executing the magic, and being our hosts. They do a good job and handle each of the elements deftly. They bring their audiences a lot of entertainment for the space and the price. Most of the illusions that are performed are fairly simple and small (the showroom space at the San Remo doesn’t really allow for much else,) but they are also wonderful. There is no space to bring in larger illusions, and therefore, they are limited. A large illusion would be a nice addition to the show, but I think that’ll have to wait until they get a better space. The smaller tricks are fine for now; they are both fun and entertaining. Adding to the evening are Antonio Hoyos, and Steve Daly. Both of these performers bring additional comedy and fun to the evening. They perform both separately and together in some very strange and wonderful routines. Also featured in the production is Russ Merlin. His high-energy segment within the production is outrageous and hilarious. The things that he puts his audience participants through are amazing. He is a lot of fun to watch. The biggest problem of the production is the theatre itself. It is hard to call it a theatre at all. The best description that I’ve heard of the space is the "double-wide trailer theatre." It is a converted banquet or conference room that they use as a theatre space. The space is better equipped than it used to be. There is a lack of adequate ventilation. The seating is awkward. The sight lines are bad. It’s not a great space to use as a theatre. With that said... They have done the best they can with that space. Everyone is doing the best job that they can with what they have. The show does, however, cry out for a bigger space. It is bursting at the seams and ready to move on. The Showgirls of Magic is a fun show, and it is enjoyable to watch. There are a lot of good elements to this production. The show is not expensive, either, and it's a good reason to go to the San Remo. The fate of this show is unknown for the future. The Hooters Corporation has purchased the San Remo, and when they take over, these showgirls may be looking for another space.