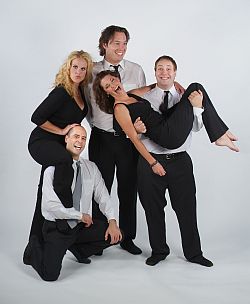 The Second City is playing in the Second City Theatre at the Flamingo Hotel & Casino. Based entirely on improvisation, the show is a fluid, ever-changing production that is spontaneous, outrageous, and hilarious. The exceedingly talented cast builds in comic scenarios, political and social satire, and musical performances that are cleverly woven together. The participation of the audience influences both the content and the course of the show---making every show unique, fresh, and original.

Second City has a long history in training performers and developing shows. The association with Saturday Night Live and SCTV brought them to the forefront of public awareness, and there are now training centers and theatres in several key cities in North America. The list of alumni has become a list of comic legends, and the things that they have produced have all been in an effort to bring out the best in people.

The show at the Flamingo is a new format for the production. It is all improvised material framed in specific format. We see the sketches build and grow upon one another, and then cleverly deconstructed at the end of the show. It gives a good continuity and ending to the show that in many ways was lacking in previous renditions.

The cast is nothing short of brilliant. This fast-thinking, quick-witted, quintet of performers truly make this show funny and memorable. Their interaction with the audience and with each other bridges the gaps between the audience/actor relationship and makes us feel involved and part of the show. Amanda Blake Davis, Martin Garcia, Bridget Kloss, Seamus McCarthy, and Craig Uhlir; all deserve the highest accolades for their performances. This is a performer driven show, and any lesser effort would have brought the show down.

The Second City Theatre is a converted lounge space that works fine. The extreme side seats are a little problematic, and the noise from the casino is very intrusive. The intimacy of the space, though, does serve them well.

In addition to this main production by the Second City, they also conduct classes and produce a "Scriptless" show with some of the advanced students. Those interested in training can call the company or go to their website, secondcity.com, for more information.

The show is a lot of fun. It is alive and fresh, and a show that would definitely be fun to go to more than once.