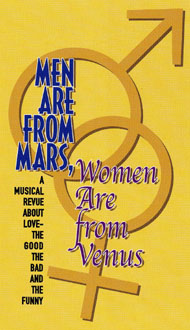 Men are from Mars, Women are from Venus is now playing in the showroom at the Flamingo Hotel and Casino on the Las Vegas Strip. This musical romantic comedy is based on the best selling book by John Gray and explores the trials and triumphs of several relationships. The show is filled with lots of cute songs and scenes which most people, both in and out of relationships, can relate.

I initially reviewed this show shortly after it first opened. The production was good, but there were a lot of shaky elements. Most of those things have been smoothed out, changed, or eliminated. The show seems to run a lot better and is a lot more enjoyable than it was in its earlier version.

The show is very similar to other relationship-type musicals that have been hitting the off- Broadway circuit in recent years. Men are from Mars..., certainly holds its own. There are several talented cast members that seem to bring this show alive and keep the pace moving. The show is a welcome addition to the entertainment in Las Vegas. It has a story, characters, conflict--it is a real theatre production. It provides some much needed contrast and is a spark amongst the multitude of productions shows in the area.

The show primarily focuses on the relationship between "Mandy" and "Nelson," played by Janien Masse and Mark W. Smith respectively. The two of them are very charming and endearing on stage, and do a lot to solidify the production. The rest of the cast is also strong, and augments the play wonderfully.

The set and settings are still a bit of a problem. They came across as cheap and poorly executed. A "less is more" approach to the sets would have strengthened this production. Fewer set pieces done well, would have been better than lots of pieces done in a mediocre fashion. Instead of being distracted by awkward set pieces, we could have focused on the relationships, characters, songs and scenes.

Thank goodness that most of the two-dimensional, pop-up, foam core cut outs have been eliminated. These pieces are always distracting, always out of place, often times problematic; they never advanced the story, nor accentuated the setting. These pieces are someone's inspiration gone horribly wrong. The production is still hanging on to a couple of these things, but hopefully, with the next advancement of this production, they'll be gone, too.

The horrible little spaceship-things that were in the beginning of the show are gone now, too.

The main showroom inside the Flamingo, Las Vegas; is a great venue for this production. The showroom is well equipped and comfortable. The flamingo has one of the busiest showrooms in town; facilitating three on-running shows. The crews of this theatre need to be commended for their work.

There was awkwardness and several missed opportunities with the blocking, staging, and choreography. A lot of the songs seemed to work too hard to be in the style of familiar tunes, and yet, with all of this, I liked the show.

Men are from Mars, Women are from Venus is doing its best to break new ground in Las Vegas entertainment. It is a good production, and it has gotten better. It is nice to see a legitimate musical amongst the production shows and the magic shows. Las Vegas could use a lot more like it.