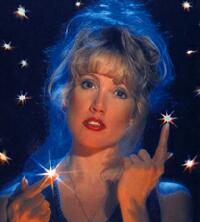 Melinda: The First Lady of Magic is playing at the Showroom, inside the Venetian Hotel and Casino. Her show is filled with music, dancing, and magic. It is not just a magic show. It is a full production show with magic. As a woman, Melinda is unique in the world of magic. She has proven herself time and time again. The show seems to fly by at a very energetic pace and is fun to watch.

Melinda is a prop magician--meaning that she relies on set pieces to do the tricks for her while she dances around and presents them. It is very much on the same order as David Copperfield or Siegfried & Roy. This type of magic relies heavily on showmanship (or show- woman-ship, in her case.), and execution is everything. If you have ever been amazed at these magicians in the past, then you will be just as engaged to watch Melinda. Melinda is a woman in a man's world. Magic is still truly a "Boy's Club", and generally, in a situation like that, a woman has to be at least twice as good as her male counterparts to achieve the same amount of praise. As a woman, Melinda is unique in the magic world, but she is also in a very difficult position--balancing the need to prove herself a good magician with the demands of simply performing and being the magician.

I feel that she has proven herself as a good magician. She can definitely sell a trick. She has a great stage presence. She is charming. She uses her dancing, her performance, and her sex appeal all very well. She has achieved more than any other female in her field. She is a solid performer and now has a good production behind her. She has nothing more to "prove." I just want to see her perform.

The only problem I still see with the production is that Melinda often times works as her own magician's assistant. The illusion comes about, but seems as if it was performed by an invisible magician, rather than as Melinda being the magician herself. Melinda should always take center stage as the magician.

The Showroom inside the Venetian is both a blessing and a curse for her production. All of the seats offer a good view of the show, and the theatre has all of the technical bells and whistles one would hope for. The lack of extra backstage space, though, limits the size and scope of many of the illusions. The stage was built for bands and not for magic. The production has, however, been able to "squeeze in" an amazing amount of tricks, sets, and illusions.

One of the highlights of the evening was master juggler, Rejean St. Jules. His unique take on juggling, brightened the evening considerably. He kept the audience intrigued and engaged. He was a joy to watch.

Video screens throughout the showroom offer an additional perspective of the show as well. Sometimes these screens offer an interesting second view of the performance, while at other times, they split the focus so badly that the audience doesn't know where to look.

Melinda puts on a good show, and has all of the potential to achieve even greater things. Melinda is an important and needed figure in the magical community, and I would like to see her receive greater accolades and recognition for her work. The show is fill with a lot of good elements and is a very enjoyable evening.