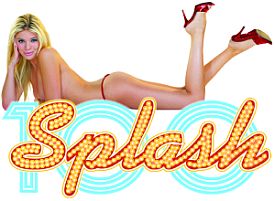 "Splash" is playing inside the Riviera Hotel & Casino. Having opened in 1985, the show has just celebrated its 20th anniversary. In order for the show to have successfully sustained itself for so many years, it has been necessary for the production to go through many revisions. "Splash" has continued to evolve and reinvent itself to both greater and lesser extents, but has always remained one of the most successful production shows in Las Vegas. The show features a plethora of entertainment elements: topless showgirls, dancers, motorcycle daredevils, ice skaters, and a solid line up of specialty acts. It is one of the big Las Vegas extravaganzas and has the recognition of having been named "Best Show of the Year" on many different occasions. This is a "more-is-more" type of show with an emphasis on bigger, faster, and more exciting. This latest edition of "Splash" is far superior to the recent versions that have been presented. The production numbers have been redone and are now much more vibrant and exciting. The show is now using the Las Vegas Centennial as its overall binding theme, but its effectiveness is a bit iffy. This has always been an act driven show with production numbers scattered throughout the different segments. The variety acts are all solid. They are a lot of fun and entertaining. The newest addition is Vitaly, who performs a wonderful aerial silk act. He shows off tremendous beauty and strength and is a strong addition to the show. The other variety acts in the show are all top-notch. The "Los Latin Cowboys," and "The Richard Brothers," a pair of gaucho entertainers and a trio of jugglers respectively, are great. Both acts are entertaining. World-class Ice Skaters, national and international skating stars Mikhail Panin and Margarita Barber perform an unbelievable ice dance, figure and adagio skating routines on an ice rink sitting center stage. Irina Grigorian, an ice-skating, hula-hooping woman is delightful. Guinness World Record Holders Bela Tabak’s "Riders of the Thunderdome" - Unadulterated motorcycle mania: Four daredevil motorcyclists racing at breakneck speeds within a 14-foot sphere of metal mesh. The act is awesome. The name, "Splash," is no longer indicative of the show. During one major overhaul of the show, all of the water elements were removed (except the ice skating, which is frozen water, which of course doesn't "splash" due to its very nature of being frozen.) The name "Splash" is a brand, though, and has become synonymous with big, flashy, high-energy entertainment. The show is much better than the last version I saw. It was nice to see the attempt at tying it all together with a theme. The use of the Vegas Centennial is a bit forced, and the video that accompanies this theme---while fun at times, goes on too long and becomes labored. It ends up making the show feel as if it is dragging. The dancing in the production is good. The use of the passerelle into the audience gives a nice up-close and personalized look at the performers. These are some of the hardest working people in the production. They are all talented and work in a variety of styles and genres. Splash is a fun evening of entertainment. There are a lot of good elements contained within the production. The show is topless so minors are not allowed--which I actually think is a shame. So much of what was presented would be of real interest to a younger audience member. Unfortunately, a covered show hasn't proven profitable. It is affordable--as far as production shows go, and I think that the show is moving in the right direction for now.