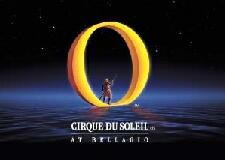 "O" is an amazing and awe-inspiring production. It continues to play at the O Theatre inside the Bellagio Hotel & Casino. Put together by the renowned company of Cirque du Soleil, it is and will continue to be one of the best shows in Las Vegas. The only way that this show might be de-throned, is with the next grand Cirque production. The show is amazing. It is a step into the surreal. Basic elements of water, earth, fire, and air are mixed and mingled in a variety of spectacular performances of dancing, swimming, acrobatics, and clowning. It is difficult to say, "the show is about...," because the themes and the elements, and how the performers interact with these things, are what the show centers around. The show is a triumph in exploring the boundaries of performance with the elements.

As soon as you walk into the theatre, you know that you are in for a treat. The theatre is designed in the style of a European opera house, complete with tiered balcony seating. The classic architecture and the beauty of the settings are a bit of a surprise. It is not what I was expecting from one of the most technically challenging and advanced shows to ever be produced, but when it comes to Cirque du Soleil, one often gets the unexpected.

The name of the show "O" is a homonym for the French word, "eau," which means, "Water." The central element of the set is a large pool built into the stage. The pool contains more than 1.5 million gallons of water and reaches a depth of 25 feet. Within the pool there are several stages, which emerge from the water to form a variety of differently shaped conventional stages. From the sea, to the land, to the air; the stages and the settings inspire the imagination. The performers are inspired artists that have the ability to create magic with their movements and abilities--whether it be simplistic or fantastic. The sheer athleticism of the production keeps the audience filled with wonder. The performers have not only mastered their arts, but they are able to make that connection with the audience beyond the proscenium and are able to touch us and move us. There are always multiple things to watch on the stage. Pictures and images are continually being created and recreated. One act flows into the next. The time seems to slip by very easily, and in what seems to be only a few moments, the show has ended. The only unfortunate aspect about "O" is the cost. The show is expensive, and the expense of the ticket limits average families and individuals from being able to see the show. The production isn't hurting for audiences. On the contrary, they are sold out every night, but I think that it would just be nice if people of lesser means could see the show as well.

"O" is an amazing show. On the one hand, it tests our concepts of what "theatre" is supposed to be, and on the other hand, it does what theatre is meant to do--inspire our imaginations and touch our hearts. You can visit them on their website at cirquedusoleil.com, or call them at 888.488.7111.