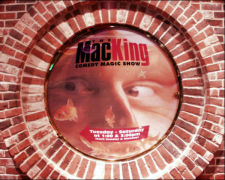 The Comedy Magic of Mac King is playing inside the showroom at Harrah's Hotel and Casino. I have seen the show many times and not only do I recommend this show to everyone that comes into town, I have named it the "Best Afternoon Show" in town for several years in a row. This afternoon show is a wonderful amusement and escape for the entire family. You cannot help but be happy at this production. Mac King is always amusing and exceedingly talented. He keeps the pace of the show very lively and upbeat, and the audience has a great time...and as a further note of his success, Harrah's has recently contracted him to perform through 2011.

The thing about Mac King's comedy magic is that the magic itself seems very simple, even simplistic, at first; but through a tremendous amount of theme and variation, these "simple" tricks turn into elaborate thoroughfares through which the most amazing magic and comedy occur. King must be praised for his ability to work an audience. It is a wonderful example of making the ordinary, extraordinary, and he takes the audience on a wonderful adventure in this sixty minute show. It often even seems as if Mac King surprises himself with a number of his illusions. It is again an example of King's ability to perform--the freshness he possesses with each of his audiences and each of his illusions time after time.

Mac is also a genuinely nice guy. He is always out at the front of the theatre at the end of each show both selling his wares and meeting, greeting, and talking with folks. Having spoken with him on many occasions, Mac is a man that is truly appreciative, and fully aware, of what he has, and he knows how lucky he is. Having worked the road for many years, he is thankful to have a regular gig so that he can lead a more regular life...a life that includes his involvement with his family.

Mac King is best know for his hosting of Fox's, "World's Greatest Magic" series, though he does not possess a tremendous amount of name recognition in and of himself, he stands out in his performance. I hope that name recognition doesn't stop people from considering the show. Once again, it seems as if Harrah's Hotel and Casino has gone for a quality show rather then simple name recognition. Each of the venues inside Harrah's contains a wealth of talent-- we may not have ever heard of these people, but the shows are great.

The showroom at Harrah's is a wonderful setting for King. His combination magic/comedy hour is just the right space for both the laughs and illusions. I confess, though, that his talent has the ability to fill any space.

Mac King is unique amongst the other magic or comedy shows in town because he does both--and very well for that matter. His magic is up close and personal. His comedy goes from the reflective to the insane. I almost dismissed a couple of the comic bits early on because they seemed as if they were just going to be silly and stupid, but King is able to walk that fine line and is able to take the silly and turn it into a supreme performance.

I cannot say enough about this performer. He is great at what he does, and this is a "must see" show for any trip to Vegas. Mac King puts on a great show...and when you see him, please tell him that I said "Hello."