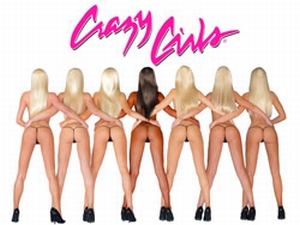 Note: Now playing at Planet Hollywood
"Crazy Girls" is currently playing at the Riviera Hotel and Casino. (I say "currently" because the Riviera was just sold and is going to close in the upcoming months.) This is the classic topless show that everyone thinks of and refers to when it comes to a topless adult production in Las Vegas. This show doesn't pretend to be anything other than what it is--topless entertainment. There are certain expectations whenever someone buys a ticket for a show, and with "Crazy Girls," you get what we have paid for--beautiful women with exposed breasts, dancing, teasing and taunting. There is no attempt at complex staging or choreography, no big sets, no elaborate artistic lighting; "No ifs, ands, or..." It is what it is.

The show still sports the greatest and most effective billboard to ever grace the market place in Las Vegas. The backside view of a line of G-strings wearing women has become an icon in the Valley. The sign was so effective, that they built a statue out of it. In the next couple of months, people are going to want to get their picture with that statue as they say goodbye to the Riviera and the show...but I have the feeling that this show will be picked up by another property. It has too much history and weight behind the title to let it just go away.

The Riviera is one of the only vintage Vegas era casinos left on the Strip. It celebrates 60 years on the Strip on April 20th, and then it is projected to close on May 4th. What some people call old...other people call classic. The theatre inside the Riviera Hotel is a small space that is only adequately equipped with lights, sound and stage space. The theatre has an older, somewhat dingy feel to it--which actually works for Crazy Girls. You also need to get there early enough to get drinks at the bar, since there is no cocktail service inside.

The lip-synced performances are sometimes static in their execution. Some of the performers don't even seem to attempt to match the words with their mouthing, not that it really matters; we're there to see breasts and women. The quality of the performance didn't seem to matter much to either the performers or the audience. On the other hand, though, there were a couple of numbers that really did go the extra mile. The number to the "Aerosmith" song with the chair was fantastic.

There were a couple of other nicely executed numbers, as well. These numbers simply explored erotica. There was no lip-syncing; just women moving seductively to music. Again...this is what we were there for, and it worked wonderfully.

"Crazy Girls" may not be art, but it is fun, and it does serve a function in the entertainment industry here in Las Vegas. It is a nice alternative for those that don't want to hit the strip clubs, and gives people the opportunity to experience that basic Topless Las Vegas show.

Hurry up and go see the show...It may be your last chance.