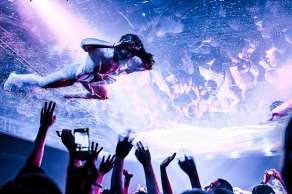 Fuerza Bruta is playing in a tent in front of the Excalibur Hotel. It is a dynamic and immersive theatrical production that delights the senses through music, emotion and kinetic aerial imagery. You are certainly a part of the show as the action takes place all around you and over you-the stage crew moves you around as necessary. You do have to stand through the entire production, so there may be some discomfort. Launched in Buenos Aires in 2003 by Creator and Artistic Director Dique James and Musical Director and Composer Gaby Kerpel, Fuerza Bruta has performed for more than six million spectators in more than 34 countries and 58 cities since its inception.

Yes, you do have to stand through the entire show, but you can move around freely, and the show is just over an hour. The audience is encouraged to dance, play and interact with the performers, but you can choose your level of involvement...you can hang out on the edge of the action, or be right in the middle of it. It is very much a club or rave atmosphere. Expect to get a little wet, and know that wind machines will blow confetti in your face and mess up your hair.

This is performance art and a lot of the images that are created are fascinating. There is no reliance on words. It's all about the images and interaction. You know that there is supposed to be some deeper meaning to each of these things, some propelling idea...but it is enjoyable even when the meaning is elusive.

In one section, that I will call, "life on a hamster wheel," takes us through an incredible journey that is exhausting for both us and the performer. A few people did get hit with flying boxes, so stay aware.

The other significant section was "playtime on the plexiglass pool." You watch as performers splash and slide their way around this pool, which at first, is hung overhead, but then the pool is lower down until its position is inches above your head...and again, the performers do their best to interact with the people just underneath them...yes, it is all very interesting.

There is also a lot of aerial work that goes on above you, but it's not really about an aerial performance, it's about playtime. I think that it would be great to be a performer in this production...it's just creative playtime...the entire time. The show is scheduled to be in town for six months.