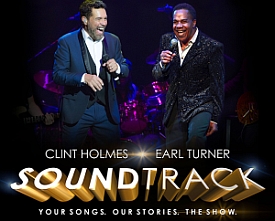 Celebrated entertainers Clint Holmes and Earl Turner take the stage together to celebrate the 'soundtrack' of our lives in SOUNDTRACK: Your Songs. Our Stories. The Show. The latest collaboration between these two Las Vegas legends is playing inside the International Theater at Westgate Las Vegas Resort & Casino. It is a rather brilliant realization of the obvious to combine the talents of these two singers. Clint Holmes and Earl Turner are two of Las Vegas' most beloved and highly-regarded entertainers. Featuring a live eight-piece band and the musical direction of Christian Tamburr, it is simply an evening of great music performed by great musicians.

Clint Holmes is one of the country's finest vocalists. A consummate entertainer, performer and recording artist, Holmes scored a number-one hit in 1972 with "Playground in My Mind." He has established a long resume of accolades and accomplishments, including "Singer of the Year" in both Las Vegas and New York City. His latest album Rendezvous was nominated for two Grammy Awards in 2018.

Earl Turner, a multi-talented singer, songwriter, musician, dancer and actor, saw the Las Vegas Review-Journal name him "Male Vocalist of the Year" and "Las Vegas' Most Dynamic Performer." A 30-year veteran of Las Vegas showrooms and countless casino theaters across the country, Turner was honored when Harrah's New Orleans Hotel and Casino named a showroom for him during his multi- year engagement and he was inducted in the New Orleans Music Hall of Fame.

Highlights of the evening were Holmes singing, "Hallelujah," a truly spiritual experience; but not to be outdone by the vibrancy and energy of Turner's, James Brown. Both tremendous.

Now the premise of the show, SOUNDTRACK: Your Songs. Our Stories. The Show, is supposed to take the audience on a musical journey that brings back memories and make us "remember when." Unfortunately, this premise seems to be forced upon the evening, and quite frankly, is completely unnecessary. I can appreciate the idea of different songs brining back memories, etc; but the idea belies itself when they start singing contemporary music. These two singers are veterans of the stage, and they don't need a "premise"...let them just get up there and do what they do best- sing and entertain us. I also believe that it is a mistake to not sing "Playground in My Mind." It is a piece of music history that solidifies our connection with the performer.

I do have a concern...I love both of these performers. I love hearing them, watching them, and being completely entertained by them; but I worry that they won't sell any tickets. They are icons in Las Vegas...but what is their draw on a national and international level? And can they compete with all of the other massive entertainment choices that we have in this town? I want this show to be a success. I want the world to know that this is an unforgettable evening of entertainment.

This is a show you shouldn't miss.