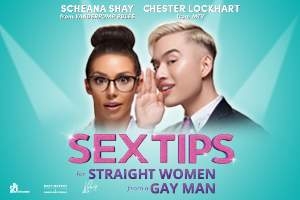 "Sex Tips for Straight Women from a Gay Man" is playing at the Anthony Cools Theater inside the Paris Las Vegas. Based on the 1997 book by Dan Anderson and Maggie Berman, the show is a candid and explicit "how to" guide for pleasuring men. The production was brought to Vegas because of its Off-Broadway success.

The premise, of course, is that women need help from a gay man to learn how to pleasure a man. Really? Are men so hard to please? Has this been a problem in our society? Other than a theme and variation on a hand job technique, I'm not sure that anyone will really learn anything new.

The show is set up to be a book review and talk with the author, moderated by Robyn (played by Scheana Shay.) The evening is quickly high-jacked by the author Dan (played by Chester Lockhart.) The production is supported by Stephan (played by Chris Hodgson,) who is supposed to be the technician of the show. There are multiple sections of awkward audience participation.

The show is certainly an amusement, but it falls short of being a great piece of entertainment. Having Reality TV stars anchor your production certainly sells seats, but the only person on that stage with any acting chops was the supporting character. The two leads show no depth to their acting, only play the most obvious elements, and have only a modicum of believability. Lockhart is likeable onstage and well committed to his role, but it's certainly not enough to carry the evening. Shay comes off as a community theater actress.

The script itself has witty passages, and I could certainly see how this show could work with really strong actors. Actors that know how to walk the line between what is appropriate and what is not.

The audience participation is right next door to audience abuse. Who thought it was a good idea to blindfold female audience members and have them simulate different hand job techniques? We feel badly for the people that are brought up onstage.

Technically speaking, the show had some problems as well. On way too many incidences, we just couldn't understand what was being said. Part of the problem was the microphones and part of the problem was basic articulation. Please, either fix the microphones, or the actor's need to learn how to project and articulate. It's not that big of a room. There is no reason that we should not be able to hear them.

This show could be a lot of fun for a drunken bachelorette party, but beyond that it is questionable.