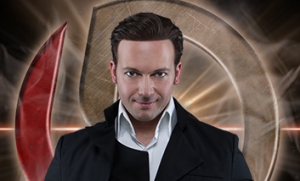 'IMAGINARIUM' is Las Vegas' newest illusion spectacular starring David Goldrake playing inside the showroom at the Tropicana Las Vegas. This show combines classic magic with circus performers, and is supported by a large LED wall to create all of the settings. Magic is a tough gig. A magic show in Las Vegas is a far tougher gig. We have seen all of the best magicians in the world, and to bring something unique to this town is very difficult. And while Goldrake performs all of his illusions adeptly, there is very little that is truly exceptional to his show. Having said that, 'IMAGINARIUM' does fill the absence of a good basic magic show in Las Vegas.

I went to the show with my daughter. (Now granted, she has seen every magic show in town for the past 15 or so years.) She knew all of the illusions. Part way through one trick, she turned around and looked at the back of the audience because she knew that's where Goldrake would make his next appearance. Toward the end of the show, she said that it was time for the levitation trick, and sure enough, the next illusion was the levitation.

After the show, I was speaking with colleges, and referred to Goldrake as "the Steve Wyrick of Luxemburg," and while only a few people understood the reference, everyone thought it was apt with regard to the manner and form of his presentation. It also brought up the fact that he was doing some of the same illusions that Steve was doing ten years ago; i.e. the Artist's Dream, the linking rings, etc. But when Steve did the tricks, he supplied a story and a reason for the progression of the illusion. Goldrake did not...his was just a series of tricks.

The levitation looked as if it came straight out of Rick Thomas' show.

There is, of course, always some crossover with magic shows. Lots of magicians perform a lot of the same tricks, but what Goldrake is lacking is a signature style...that "thing" that separates him from all of the other magicians. He is currently a good generic magician, and he will stay that way until he finds that unique voice, style, and signature.

The best part of the night was the water escape. Goldrake's theme and variation on that was done exceedingly well. I do wish that there had been a close up camera on the act. The most interesting part of it was to watch as he picked the locks...but that was too small to really see.

Other problems with the production also included the sound mix. The opening of the show includes music with a voiceover...unfortunately, the music drowned out the voice and I have no idea what was said. During the show, a lot of the music was so loud that I witnessed people covering their ears.

The pace of the show could also use some tweaking. Some of the illusions could go much faster than they are, but they have locked themselves into specific music. On several occasions, I painfully watched as the performers waited for their musical cues to advance the tricks. Part of making something magical is seeing how quickly these tricks can be done.

The 'Sideshow' performers were a great addition to the production. They included some of my favorite circus acts including: the German wheel, contortion, straps, and standing trapeze. I never get tired of watching these talented performers.

The circus performers are not, however, dancers. And when they were asked to support illusions, by being either production support or as magical assistants, the effect was...well, a bit thin. Perhaps the company spent too much money on buying and programming the LED wall.

David Goldrake does have good credentials. He is known as the 'International Man of Mystery'. His artistic versatility and ability to speak 7 languages fluently make him a unique magician, speaker and actor who has inspired audiences all over the world. He has performed for royalty, international celebrities and fortune 500 companies such as Berkshire Hathaway, Samsung Electronics, J.P. Morgan Chase and Disney. His performing venues have ranged from the Moroccan desert to the world's largest indoor stage at the Grand Sierra Resort in Reno, NV. In 2010 he was awarded the coveted 'Mandrake d'Or' award and in 2015 he was awarded the world famous 'Merlin Award' as 'Best European Illusionist 2015'. David Goldrake is also dedicated to numerous philanthropic projects. For him 'giving back' is a responsibility. He uses his energy to support several organizations and plays an active role in raising awareness of them.

As I said at the beginning, 'IMAGINARIUM' is a good basic magic show that combines classic magic with some circus arts. This would be a great show for families that are introducing their kids to the world of magic. And I know that this show will get better. Perhaps they will re-cut the music so that it can match the pace of the production. Perhaps they will focus a little closer on the sound mix. Perhaps they will augment the production with some dancers to really support the illusions. Perhaps Goldrake will find his signature. Perhaps.