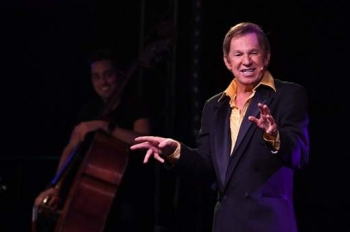 THE PAUL LYNDE SHOW is playing inside the Windows showroom at Bally's Hotel & Casino. This is a masterful tribute to one of America's most honored comedians by comedian and acclaimed celebrity impersonator Michael Airington. Airington takes his audience on a fun laugh-filled trip through the highs and lows of Paul Lynde's life - from his big-screen debut in New Faces of 1952, through his Broadway turn in Bye Bye Birdie, his TV turn as Uncle Arthur on BEWITCHED to thirteen years as the center Square on the Hollywood Squares.

It is a simple show...one man, accompanied by a three-piece band. It accurately portrays the legendary comic, and allows us to relive, recapture, and reminisce about the life and accomplishments of Paul Lynde. The show also features voiceovers from the Master of Hollywood Squares himself Peter Marshall. And, this show is produced with the full approval and co- operation of the estate of Paul Lynde.

Now as fun as this show is...my biggest question is, "why?" Are there really so many Paul Lynde fans out there that they have been demanding and clamoring for this show? What is the real demographic? With all of the choices of entertainment, are there really enough people out there who are looking at the lists and saying, "Wait, let's go see a Paul Lynde tribute." I don't want to diminish the performance, but who does this show actually attract? This is a really really nitche market...not only is it an aging audience, but it is also a dying audience. I am glad that Michael Airington got the backing to put on this show, but I would be worried for the producer's investments.

Michael Airington does do a good job. I liked his performance. And while tracing the life and career of Lynde, he utilizes many of Lynde's own words and comedy routines. He honestly brings to life the actor's comic genius.

Unfortunately, to really enjoy this show, you have to have been a fan of Paul Lynde...out of context and with no history, background, or knowledge of Lynde, the show doesn't really work as a stand alone piece.

I wish Airington and his show all the best. I hope he has great success...I just don't see how it is possible.