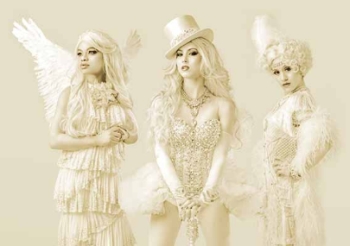 Baz: Star Crossed Love, is playing inside the Palazzo Theater. This is a musical mash up of three Baz Luhrmann films: Romeo and Juliet, The Great Gatsby, and Moulin Rouge. I have mixed feelings about this production. Some of the production numbers are brilliant. A lot of the acting is bad. The singing is out of this world. A lot of the directing is muddled and lacks focus. The dynamic of the show is lost without connective tissue, and the last third of the show is all about big numbers...the bottom line is that without the dynamics, we just don't feel anything for the performers or characters.

The creators of this show have missed the boat...it's supposed to be about love, longing, loss. It's supposed to focus on these relationships. We should care about these couples, feel their pain, celebrate their victories, and weep for them when they lose it all. We should ride this dramatic rollercoaster through the songs, the words, the dancing, and the production...but we don't.

Part of this problem is the acting itself. Some of the actors are simply sloppy in their delivery of lines. Some of them are simply going through the rhetoric of the words without the passion or objectives needed to convey the emotions and content of the scenes. The biggest problem with this is that if you don't already have a familiarity with these films and these stories, then you are lost. We need context. We need to have the characters established. We need to feel an emotional connection with these characters, or the stories don't work. The actors are not doing their jobs.

Now as singers...they are wonderful. Some of the voices in this show are nothing short of brilliant. These performers were obviously hired for their singing ability and not their acting ability. And as good as they are; we need some balance for a complete show.

The directing is muddled and lacks focus. There are times that as an audience member, you just don't know where to look. And everyone runs in this show...people are running in and running out of all the different scenes...now I understand that you want to move the pace along and get the transitions done quickly, but it doesn't always serve the production, and often, becomes a distraction. Of course, I blame the director for not focusing on the acting as well. The director/creators did do a good job on the production numbers, but they forgot to tell the story.

I loved the dancers. I loved the musicians. I liked how they were used and utilized and truly incorporated throughout the show.

The Palazzo has done a tremendous job at renovating the theater. They took the 1700 seat theater that originally housed "The Jersey Boys," and turned it into a really interesting 650 seat theater. It is comfortable, intimate and interactive. It is really a beautiful space.

The show is a mixed bag of brilliance and sloppiness. It seems that the creators were so impress with their own innovation that they forgot the basics of good theater.