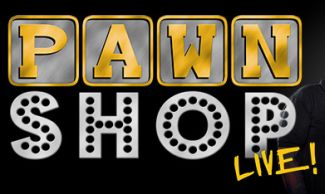 Pawn Shop Live! is currently playing in the Gordie Brown showroom at the Golden Nugget Hotel & Casino. It is billed as a parody of the story behind the TV show, "Pawn Stars." I have enjoyed the "Pawn Stars" television show in the past. It is filled with interesting people, and it has interesting tidbits about the items that come into the store. I can understand wanting to extend the brand with a show that’s a parody...I imagined seeing life in the Pawn Shop and then everyone breaking out into song and dance...but my hope of seeing a show with any redeeming production value was quickly dashed. Pawn Shop Live! was an awful show.

The show seems to have been put together by a team that neither understands the nature of parody, nor the basics of putting together a decent show. Bad writing, bad directing, and bad acting would make this show a bad production even at a community theater level; and as far as a Las Vegas production in a major hotel, it is an embarrassment.

Over-selling and under-delivering seems to be a recurring theme with this production. It seems as if they did a good job at selling the idea of this show without having the capacity to actually deliver a decent product. These were good salespeople, but bad theatrical practitioners. I celebrate the achievements of individuals who step up from the community arena onto the big stage of professional theatre. But when evoking the sacrosanct word "Broadway-style" standards are brought to a new height.

So who was responsible for the show? According to the PR, the show was "created by Emmy award-winning producer Derek Stonebarger." It sounded very impressive, but I hadn’t heard of Mr. Stonebarger, and I wanted to know for what he won his Emmy. After some digging, the only thing that I could verify was that he won a scholarship from the Northern California chapter of the organization while in college...not really the same as winning an Emmy.

The Director and Co-Writer of the show is Troy Heard...listed as "one of the top theater directors in Las Vegas." ...which felt odd, because I know most of the directors of most of the major shows, and I hadn’t heard of him. Another trip to the internet showed that he is indeed a top director...of Community Theater. The unfortunate nature of the production started to make sense to me. The one feeling that I had throughout this production was that it was done by amateurs.

The writing is pedestrian. The narratives are perfunctory and all of the humor seems to come from the common, stale, and daily quips that people generally use...it would be a mistake to look for originality in this script.

The directing lacks any sense of dynamics. If an actor had a narrative, they moved down center. If there were three or more people on the stage, then they stood in a line in the middle of the stage... It looked as if they had no director at all. The show was replete with so many basic directing errors, that it made me wonder if the director had ever taken a course in directing.

The acting was some of the worst I’ve seen...perhaps they were directed that way...relying on stereotypes, mugging, and caricature rather than developing any sense of real character.... It’s hard to say...perhaps that’s how they were interpreting "parody." The only way to achieve good satire and parody is to have characters that are truly committed to the absurdity around them. "Pawn Stars" works because these are real people, and they are committed to being exactly who they are. This show needed actors that could indeed play characters, but this company didn’t get it...they failed. There was one actor that did a decent job...I’m not going to say which one in order to give them all plausible deniability.

And to break all of this up were extended videos...with bad acting. Two of the videos didn’t really have anything to do with the progression of the show at all...just something that I’m assuming that they thought were funny..."How to be a Baller," and Chumps dream sequence of what he imagined he have done with the robber. The only thing that these videos seemed to accomplish was to kill time so that there would be enough material to actually call this a show.

It just feels like this company was so enamored with their own creativity that they forgot how to put on a show. It is such a shame. Good idea...horrible execution. This is a bad show, and I hate bad shows. Bad shows hurt of all Las Vegas entertainment and diminish our reputation as the entertainment capital of the world. Maybe if we all pretend this show doesn’t exist, it will just go away.