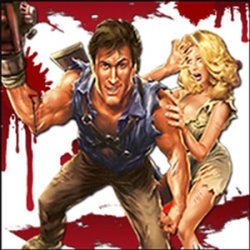 Note: Evil Dead - The Musical 4D is now playing at the Tommy Wind Theater
"Evil Dead the Musical" is playing inside the V Theater at Planet Hollywood. It is a musical parody on the horror movies, Evil Dead 1, Evil Dead 2, and Army of Darkness. It is a kitschy and campy romp filled with blood and gore with the greatest of intentions. There is even a splatter zone in which you are pretty much guaranteed to be sprayed with blood. It is a fun, but problematic production that could have a tremendous life if it were just tweaked in a few places.

The story goes like this: five college students go to an abandoned cabin in the woods, and accidentally unleash an evil force that turns them all into demons. It's all up to Ash (a housewares employee, turned demon-killing hero), and his trusty chainsaw to save the day. Blood flies. Limbs are dismembered. Demons are telling bad jokes... and all to music.

The show is bad in a good way...it revels in its badness. And it is this very element that makes it fun. There is a free flow of interaction between the performers and the audience which is essentially the life blood of this show.

The show, however, is too long... Just about every song could cut one verse, transitions are deadly slow, and the dialogue could be easily streamlined. This should be a one-act production...the two-act structure with the intermission does not serve this show well.

The production works, but the show is in desperate need of a stronger director...transitions are sloppy, cues are sloppy, dynamics are uneven, technical problems abound, movement and blocking are random, haphazard, and don’t move the action forward; and acting and acting styles are inconsistent.

If you are drunk enough or don't care enough (because you're just there to get squirted with blood) the show is fine and fun...the problem, however, is when you start looking at this show with any sort of critical eye or applying any standards to it, the show falls completely apart.

Camp, parody, and satire are actually very difficult things to do well. There is a fine line that has to be walked between just right and too much...and it needs actors that can commit to the absurdity of the circumstances. When the performer starts playing the campy aspects, it immediately stops working. This production had a full range of actors---from the good to the bad. Most of them handled audience interaction well, but overall, it was a very uneven production.

The show has been playing for a year now, and you would think that after a year the show would get tighter and better...but it seems to be getting sloppier and more indulgent. Many of the actors are having so much fun with their own inside jokes that they’re not serving the audience. After a year...could someone please address and fix the sound issues...missing a lot of the dialogue and lyrics is not helping this production. At the end of the show the audience is asked to get up and dance (sort of like the Time Warp from Rocky Horror,) and the audience is doing their best...but I had people all around me asking, "what did he just say?" And following the actors onstage didn't help much because they were all doing something different, too. And after a year, could someone please invest in better costumes and props? This show looks the poor relation to all of the other "Evil Dead" productions that are out there.

I do not want to dissuade people from attending this show...it is a fun show with a lot of potential. I do encourage the show to step up and start achieving some of the potential that it has so far missed.