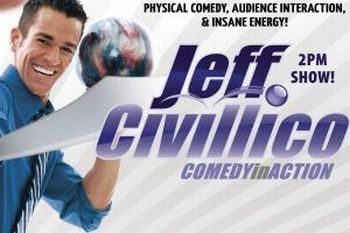 Note: Now playing in Bugsy's Cabaret at the Flamingo
Jeff Civillico is playing inside the main showroom at the Quad Resort & Casino (Formerly the Imperial Palace.) Jeff does an afternoon show that is filled with comedy, juggling, and a lot of good ole stupid human tricks...and he does a wonderful job. Jeff's show is one of the funniest and most entertaining shows that I've seen in a long time, and it is all due to one thing...talent.

It's tough to get an audience to take a chance on a relatively unknown performer doing a "juggling" show in the afternoon ...which is why you see so many incentive packages just to get people in the door. Once they are there, however, it is the job of the performer to keep them there, get the word out, and get them to come back. I have always felt that talent is the key ingredient to a successful show in Las Vegas---not spectacle or fancy tricks, but true talent. It is a talent that engages the audience and makes them like you from the moment you step on stage. Jeff Civillico has that kind of talent. He is appealing, energetic, and replete with stage presence and enthusiasm.

Jeff is the Founder and President of Win-Win Entertainment, a non-profit which pairs performers willing to donate their time and talent with charity organizations in need of entertainment. He is excited to be on the membership committee of the Young Non-Profit Professionals Network of Southern Nevada, and to get more involved in the non-profit space. He is an avid member of the National Speakers Association of Las Vegas. Jeff is also ridiculous. He holds a world record for bungee jumping on his unicycle off a cliff in New Zealand, and goes "joggling" for fun. "Joggling" = juggling while jogging. He raised $5000+ as a team member of "Athletes for Special Kids" by joggling all 26.2 miles of the Disney Marathon. Jeff has performed everywhere from Disney resorts to the White House, as well as on television, and most recently starred in the Travel Channel show Vegas Strip Search.

The show is opened by Alonzo "Turf" Jones, a hip-hop contortionist dancer from Season 7 of America's Got Talent. His routine was nothing short of amazing...and sometimes disturbing. As he was rotating his shoulders out of their sockets, I could only feel the pain of my own rotator cuff problems and imagined what he might be facing in his future. His introduction, however, was a great opening of what would be a wild show.

Another one of Jeff's strengths is his ability to interact with his audience. He put the people at ease and took us on quite the rollercoaster ride. His sequences with the audience brought forth some of the best, honest, and hearty laughs that I have had in a long time.

Jeff Civillico surprised me. Usually, I find acts like his amusing, but I generally don't love them. I loved his act, and his show is a great family friendly way to spend an afternoon in Las Vegas.