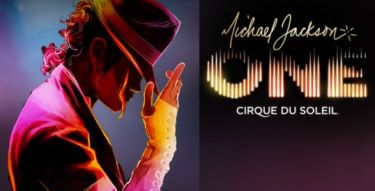 "Michael Jackson: One" is playing in the showroom at the Mandalay Bay Resort & Casino. This much anticipated opening of the new resident Cirque du Soleil show is filled with everything that one would expect from a Cirque show: lots of acrobats, dancers, and sheer spectacle...more is more. The show also comes with other things that we've come to expect from Cirque-a very uneven show that has far more concept than it does clarity, and a show where the technology often over-shadows and upstages the performers. Overall, the show is good, but flawed.

The show description that was put out by Cirque reads: "Michael Jackson ONE is a state-of- the-art visual and audio experience creating a theatrical evocation of Michael's creative genius. Michael's artistry and spirit are expressed through the vibrant energy of the cast of 63 dancers and performers, underscored by aerial performance, driving acrobatics, and vivid choreographies that use the urban/hip hop idiom as a springboard for exploration. ONE is a heartfelt tribute to the work, innovative spirit, and legacy of Michael Jackson - the King of Pop, the genius, the visionary, the One."

And herein lies the problem...
When it comes to theatrical circus entertainment, there is no one better than Cirque du Soleil. When it comes to its acts, Cirque does not disappoint. There are always brilliant performers, and there is enough theme and variation with the elements that they are always interesting. The aerialists, the acrobats, the specialty acts...are all phenomenal. The problem that has always plagued Cirque is the creation of a cohesive show that has a specific story or theme. We have witnessed this with every one of the last six shows that have opened here in Las Vegas.

The cohesiveness problem with "Michael Jackson: One" is the very element that is supposed to tie things together and give the show a through-line. I'm going to call these characters the Scooby Gang because they are very reminiscent of the four mystery investigators of the TV show "Scooby-Doo." All they are missing is the "Mystery Machine," the dog, and a theme song. The Scooby Gang seeks some of the iconic accessories that Jackson made famous (i.e. the shoes, the hat, the sunglasses, and the ever elusive glove.) By finding these things, they are somehow transformed...but to what end? There is no reason, and there is no payoff---for the one thing that is supposed to tie the show together!

Cirque has always incorporated the latest and greatest technologies in their shows, and this one in no exception. The technology is so good; however, that it often over shadows the performers. The projection of Jackson dancing with the other performers is wonderful...but it's the video that shines and not the performers...which is just one of a dozen examples in the show.

If we have learned anything from Cirque du Soleil, though, it is that they will get the show opened now, and then take the next couple of years to fix it. I predict that in six months there will no longer be a Scooby Gang.

So the only thing that I can safely say about "Michael Jackson: One" is that it's a decent start.