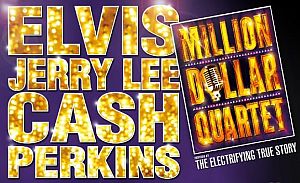 "Million Dollar Quartet" is playing inside the main showroom at Harrah's. The show is based on an actual meeting and jam session that occurred on December 4, 1956, at Sun Studio with Elvis Presley, Johnny Cash, Carl Perkins and Jerry Lee Lewis. After a run on Broadway and a tour stop at the Smith Center last year, it has landed this open- ended run. It is a show that is lots of fun with a lot of great music.

This is a story of how the legends began and from where they got their start. They weren't always famous, of course, and we don't often think about the humble struggling beginnings of these singers. It makes for an intriguing story---especially since it is foundation is based in actual reality.

At the center of this story is Sun Records Studio in Memphis, Tennessee and its owner, Sam Phillips. Phillips discovered and produced the records of a multitude of singers throughout his career. He encouraged young artists and while personally supervising their development, made many of them into stars. It was this part of his innovation that got him inducted into the Rock 'n' Roll Hall of Fame.

The impromptu meeting was engineered by Phillips and the devise to propel the story centers around contract negotiations...but really it's all just an excuse to get these characters together so that we can hear some great music.

The show is somewhat reminiscent of "Jersey Boys," in that we get a little bit of a story created around a musical body of work...and in "Quartet," we get a lot of music. In fact, some of the dialogue has been cut from the original Broadway production in order to get to each song a little quicker. As usual, this is a disservice to the characters and their development.

The cast of "Quartet" is brilliant. They all handle their own singing and musical instruments. This is not an impersonator show necessarily. This is more about the feeling of the time and of the music. It is also about allowing these actor/musicians to make this music their own...and in doing so; they make it a bit more real for us.

The set is beautiful. The sound is great. This is a well done production in every aspect.

This is a show that is definitely worth seeing. We all seem to look back at the beginnings of Rock 'n' Roll and cherish that sound that was so fresh, and we still see the roots of that music in every progression since.