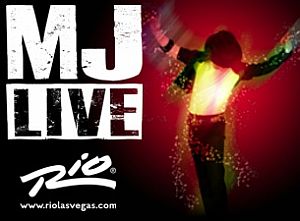 Note: MJ Live! is now playing at the Stratosphere
"MJ Live!" a tribute to Michael Jackson's performing career plays in the Crown Theater at the Rio All-Suite Hotel & Casino. The show stars Michael Jackson impersonator Michael Firestone, and he delivers an evening of Jackson's greatest hits, complete with the look and the sound. He is backed up by both a live band and an ensemble of eight dancers.

Firestone delivers a strong performance. All of the songs are performed live and staged with appropriate style and panache.

The talented tribute artist lives in Las Vegas and grew up as the son of an Air Force serviceman forcing his family to move around a lot. He's lived in North Carolina, England and New York where he was born. It was in North Carolina as a teen-ager where he began working on his career and was self taught. He used VHS tapes of Michael Jackson performing and would slow them down to learn Michael's famous dance moves. Firestone learned to sing with CDs and tape recordings for voice training. He also would go to gospel churches in North Carolina and sing for vocal practice. He said, "I wanted this career really bad."

The most striking aspect of the show was how the crowd was reacting to what was going on onstage...the people were going nuts. They truly loved Michael Jackson, and by extension, loved everything that was occurring in front of their eyes. For the audience, this show allowed them an opportunity to have a shared MJ experience...loving the man they had lost, and accepting the embodiment by Firestone.

The Crown Theater has always been a bit of a strange space. The circular room has a medium sized stage at the back which allows for good access to the audience by the performers. The theater definitely has good seats and bad seats. If you are placed on the sides, your view will be awkward.

Like any tribute/impersonator show, there are traps and shortcomings...
Michael Jackson has some of the best music videos out there, and they have even stood the test of time. It is usually a mistake to try and recreate these videos onstage because they will always fall short. And for the performer, no matter how well they are able to imitate the moves and the sound of the star that they are trying to impersonate, I have yet to find an impersonator that can recreate the charisma that all of these greats innately had.

Michael Firestone is a talented performer. He does Michael Jackson very well, but at some point, I would love to see him...the actual performer. I want to see what he can do. He obviously has a lot of talent, but I feel that I never get to appreciate him. I only get to applaud the imitation and not the real thing.

"MJ Live," is a strong Michael Jackson tribute show. Obviously, if you're an MJ fan, it is wonderful and could be the medicine that you've been looking for.