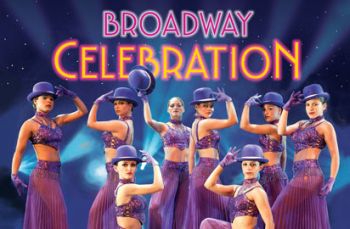 "Broadway Celebration" is playing inside the Broadway Theater at the New York, New York Hotel and Casino. This is obviously a show celebrating the music of Broadway. The cast is comprised of four singers and an ensemble of dancers—all of whom do a fine job. The show, however, is a generic formulaic theme park-type production that doesn't seem worthy of being called Las Vegas entertainment. The show is produced by Spirit Productions and after looking at their website, it all made sense. Based in Myrtle Beach, Spirit Productions specializes in this generic type review. Every show looks completely interchangeable with every other show. I'm sure that these shows play just fine in Myrtle Beach and Branson, but I would like to think that Las Vegas demands a bit better quality and higher standards. Perhaps there is enough of a market of retirees that just want to see pretty people dance and sing to songs that are familiar to them that this type of show will make a go of it here, (my body just involuntarily shuddered inside at the thought.) The show that plays just after this production is "Dancing Queen." It, too, is produced by Spirit Productions. The show uses the same cast and is basically the same show with different songs...and when I write my review of that show, it will be basically the same as this review with the names reversed. The Broadway Theater is an odd space...I know that the room is a conversion of a conversion of a conversion, and it looks as if they still want to keep their options open for a conversion. The seating is in rows on a flat level, and the stage still looks as if it was forced into place at one end. With respect to "Broadway Celebration," there are some sad choices... All of the music is tracked with background vocals...the dancers, of course, lip-sync their way through the numbers to make it look as if there is a full "Broadway-type" number going on. The taps for the tap dancing sequence are dubbed in, and the tracks themselves are no better than karaoke. Not really inspired by the numbers, my mind began to wander...and wonder...how did they secure the rights to all of these numbers...and the use of some of their logos? It is hard to imagine that all of these songs are covered by a basic ASCAP/BMI contract. I doubt that MGM/Mirage would let a show into one of its properties without properly secured rights...but here's the problem...if I'm thinking about these things during the show, then there is something wrong with the show. (Perhaps it was when they were singing songs from Les Miserables while wearing white tuxedos and gowns...nothing says French Revolution like formal wear.) The different numbers chosen for this production seem random at best. There doesn't seem to be any logical progression...just pretty tune after pretty tune. The only redeeming parts of this show are the performers themselves. Both the singers and the dancers do a great job. I wish that the singers had either better tracks or actual musicians to which to sing, and I wish that the dancers had better choreography to execute. The cast is a group of talented people, and I'm glad to see them working. I hope that they are being paid well because the production certainly didn't spend the money on scenery or costumes. This is a generic, theme park quality show. At least at a theme park, the show is included in your admission price.