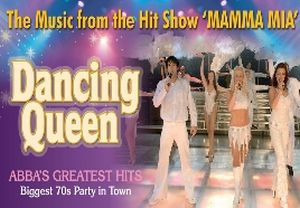 "Dancing Queen" (with the subtitle: Abba's Greatest Hits) is playing inside the Broadway Theater at the New York, New York Hotel and Casino. This is obviously a tribute show celebrating the music of Abba. The cast is comprised of four singers and an ensemble of dancers---all of whom do a fine job. The show, however, is a generic formulaic theme park-type production that doesn't seem worthy of being called Las Vegas entertainment. The show is produced by Spirit Productions and after looking at their website, it all made sense. Based in Myrtle Beach, Spirit Productions specializes in this generic type review. Every show looks completely interchangeable with every other show. I'm sure that these shows play just fine in Myrtle Beach and Branson, but I would like to think that Las Vegas demands a bit better quality and higher standards. Perhaps there is enough of a market of retirees that just want to see pretty people dance and sing to songs that are familiar to them that this type of show will make a go of it here, (my body just involuntarily shuddered inside...) The show that plays just before this production is "Broadway Celebration." It, too, is produced by Spirit Productions. The show uses the same cast and is basically the same show with different songs...and when I write my review of that show, it will be basically the same as this review with the names reversed. The Broadway Theater is an odd space...I know that the room is a conversion of a conversion of a conversion, and it looks as if they still want to keep their options open for a conversion. The seating is in rows on a flat level, and the stage still looks as if it was forced into place at one end. Things that are specific to "Dancing Queen"...well, the sound was awful. More echo and reverb are not the answer to good sound (though it seems that the sound tech for this show obviously thought it was.) All of the music tracks (complete with backing vocals) are a little better than your standard karaoke tracks. The biggest oddities with respect to "Dancing Queen: Abba's Greatest Hits," is that ten or fifteen minutes into the show, it is announced that they will now do a selection of 70's hits... (wait...what?) I'm guessing that these are crowd favorites that are dropped into almost every Spirit Production show. The Bee Gees songs were butchered, and of course there was the song "Celebrate," and then a rousing rendition of YMCA. Finally, we get back to the songs of Abba...for another ten or fifteen minutes, and then it's a tribute to Motown...this was painful. There was barely a bit of soul in the entire cast. It looked like "Up with People" does Motown (to borrow an early 70's reference.) Why? Why? Why...? Is this how Spirit Productions does all of their shows? Do they drop in standard sections of crowd favorites into a theme? Did they feel that Abba didn't have a strong enough song book to sustain an hour and five minutes? The only redeeming parts of this show are the performers themselves. With some exceptions, the singers do a great job singing to the tracks, and the dancers do a great job executing the bad choreography that they were given. The cast is a group of talented people, and I'm glad to see them working. I hope that they are being paid well because the production certainly didn't spend the money on scenery or costumes. This is a generic, theme park quality show. At least at a theme park, the show is included in your admission price.