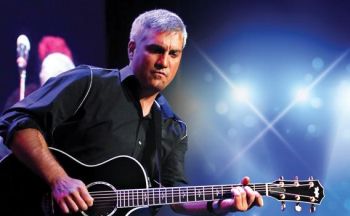 Taylor Hicks is playing inside the Napoleon Lounge at the Paris Las Vegas Resort and Casino. Hicks was the winner of American Idol, season 5 and has come to Vegas for an extended run. He first opened up at Bally's in June of 2012 in a curtained off lounge area, but now has moved down the hall to the much nicer Napoleon's. He has just recently extended his run to go through 2013.

Taylor Hicks is a musician, full of grit and soul, and as such, he and his band put on a great show. Every person in the four-piece band is a great player, and with Hicks as the front man, this group makes you remember why you want to go to see bands in the first place.

Hicks shares little tidbits of himself...his beginnings as a musician in a roadhouse; which explains a great deal as we listen to his take on Southern soul, R & B, and country and blues. The dynamics of the evening flow extremely well with his mix of cover tunes and original work, upbeat songs and ballads.

Napoleon's in a very intimate space (seating about 200 people,) and offers a great venue for a personalized evening with Taylor Hicks and his band. There are no sets, no specialized lighting---just the music, and it works wonderfully.

Immediately after American Idol, Hicks released his debut single, "Do I Make You Proud," which entered at #1 on Billboard's Hot 100, Pop 100, and Single Sales Charts. He also starred in the hit musical, GREASE as Teen Angel on Broadway, and later joined the national tour of the production.

Hicks makes us wonder about what is "supposed" to happen to a winner of American Idol---what they aspire to, and where they end up. We see the gigantic success of Kelly Clarkson and Carrie Underwood, and we have all but forgotten Fantasia Barrino, Rubin Studdard, and Kris Allen. We see runner-ups eclipsing the accolades of the winners, i.e. Jennifer Hudson, Chris Daughtry, Katherine McPhee, etc. But our first question to ourselves is; why is a winner of American Idol playing a small lounge in Vegas? We instinctively and immediately question why. Why would someone that has experienced that level of national fame with millions of fans be playing such a small room? It is a paradox that makes us wonder if there is something wrong...

In an attempt to partially answer my own question, I know these things... Season 5 of American Idol got it right. Hicks won because of his superior musical abilities. Outside of that genre, however, Hicks is not a cute pop star that has generalized broad based appeal. He is a musician, and he will appeal to an audience that has more discriminating taste about their music. And quite frankly...having a steady gig in a lounge in Vegas with the ability to play the music that you love is not a bad gig. Also, the intimacy of the lounge has its advantages...it's a better experience, and he is almost always guaranteed a full house. Kudos to you, Taylor Hicks, you put on a great show.