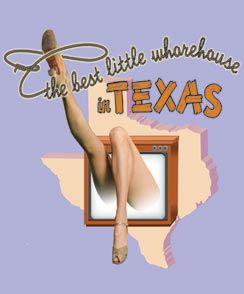 "The Best Little Whorehouse in Texas" is playing in the showroom downtown at the Plaza Hotel. It was originally produced on Broadway in 1978, and is based on the book by Larry L. King and Peter Masterson, with music and lyrics by Carol Hallis. The musical is based on the true story of the legendary Texas brothel known as the Chicken Ranch. The risqué musical chronicles how the town’s sheriff and regular patron of the brothel fights to keep the historical whorehouse open as a crusading do-gooder television commentator seeks to close its doors. The production at the Plaza is, unfortunately, lacking...a lot. Sadly, this production is not very good. There is some good talent, but they are lost among a bad set, bad lighting, bad sound, bad staging, bad choreography, and overall really bad direction. Due to the truncated script, characters are not developed, and relationships are not established. It is a low budget show...which really shouldn’t be a problem as long as you have creativity...the smaller the budget, the greater the need for creativity, and regrettably this production is devoid of any of that. On the face of it, "The Best Little Whorehouse in Texas" could be a good fit for our city...if done well. It has all of the elements within the show for success. It is a fun show. It has a lot of sexy elements to it, and it is proven material. The problem is of course in the execution of the material. The set primarily consists of a large platform at the back of the stage to represent the brothel as well as a couple of other locations...but it is a large cumbersome piece that is immovable and lacks basic function...and it is always there. The lighting on the upper platform is so bad that it becomes a useless space for any scenes. The steps into the center of the stage are nice, but they are hardly used for any staging. And the two stripper poles that flank the stairs are used once in the opening, and then sit there as distractions for the rest of the show. The set is truly the big white elephant in the room that is always there, always visible, and yet everyone pretends doesn’t exist. The show would have been much better served with smaller pieces that could have suggested locations, moved in and out, and continually transformed the stage...it probably would have save money as well...but that would have been a creative solution. The lighting does nothing for the production except illuminate the stage. It does not isolate areas, create mood or atmosphere, and does not shape the space in any respect. We see everything all the time...which means that we see that big platform at the back of the stage all the time. Creative lighting could have been the answer to many of the budgetary woes and could have created a huge assortment of areas that would have served the play much better. I do not blame the performers for the failings of this production. I believe that the fault all lies with the show’s director Betty Sullivan-Cleary. The blocking and staging of this show does not help establish characters or relationships. It does not focus our attention. It does not establish a pace and is lacking in basic dynamics...in addition to the poor choices with regard to script, lighting, set, etc., etc. I have seen better community theatre productions. In all of this, there are a couple of notable performances. Ron Smith as the Sheriff does a wonderful job. He is a strong performer with both his acting ability and his singing. He commands the stage every time he sets foot upon it. And John Ivanoff, as the Governor, steals the show with just one number. "The Best Little Whorehouse in Texas" needs a lot of work.