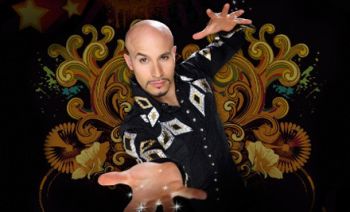 Seth Grabel is playing inside the Wolf Theater at the Clarion Hotel. Seth is a very talented magician / performer / entertainer, and he puts on a good show. He was featured on "America's Got Talent" a little while ago and even came back as the Wild Card favorite. His show recently moved to the Clarion from the Royal Hotela place I feel in which he was slowly dying. This move gives him a real shot at some of the success he deserves.

Seth has been paying his dues for years. He is talented. He has worked gigs and events. He has opened for people and been featured in performances. He is a multi-faceted performer that not only does stage magic, but also close-up magic...as well as being a capable variety artist and an acrobat. He has a good look, a good presentation; he is well rehearsed, creates a great relationship with his audience, and has managed to get some good national attention.

With all of these accolades, though, Seth has been battling the exceedingly competitive entertainment economic climate in Las Vegas, in many ways it has turned into a situation of "survival of the richest." The cream does not always rise to the top anymore. It has turned into a situation where success can only be achieved if you have deep enough pockets to pay for a decent stage and spend enough money on marketing to survive long enough to get good word out about your show...and only then can you actually be put on all of the ticket broker lists so that you can then sell a ticket.

I can see all of these things slowly moving forward for Seth. He is now in a place where he can show off a lot more of his skills. He has survived long enough where he can now be carried by brokers and has established a little name recognition.

Now, the Wolf Theater at the Clarion is still not the end-all be-all of performance spaces for him, but it is a huge improvement. He gained notoriety doing his "acromagic;" combining stage magic with his acrobatic skills. At the Royal, he could do none of it. Here, at least, he actually has a stage and has been able to incorporate some of it.

And as I write this, I know that Seth is putting in more illusions, changing things up, and working to constantly improve his show. The show that I just saw will not be the same show in six monthsit will be better. The longer he is on stage, the more he is going to improve things.

On a side noteevery performer in the small and medium venues sells merchandise to make extra money on the back end, and while Seth has his assortment of magic kits, etc., he also has a very unique item. Seth's Magic Dust---a combination of spices and seasonings to add to your mealsand surprisingly, it's good. I have a jar of it on my spice rack and use it regularly. It is just one of those oddities that you should look for

I would like to see Seth succeed. He is a good performer, he has paid his dues, and he is not going to disappoint any audience.