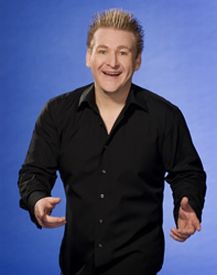 Jonathan Clark and his show, A Lasting Impression, is playing at the Starlite Theater inside the Riviera Hotel and Casino. This is the first impersonator show that I've truly enjoyed in years...partly because of the talent of Jonathan Clark, partly due to a very well-crafted show, and partly because this is the first impersonator show that breaks out of the tired old formula that has dominated the genre for years. For that, I send Jonathan kudos and thanks. Impersonator shows have gotten into such a horrible rut in recent years, that when someone asked if I would see their show, I only begrudgingly dragged myself to the performance. The problem was that everyone wanted to be the next Danny Gans...so everyone made their show in the style of Gans' production, but sadly with only a little theme and variation to each...it was the same show with the same impressions...I can name five impersonators off the top of my head that all have this same show. I was becoming disgusted with the genre. I was going to run screaming from the theatre if I had to hear another George Burns to Kermit to Louis Armstrong to Presidential medley to Columbo combination...I desperately wanted to hear any impersonation that wasn't taken from 60's and 70's personalities. So finally, it seems that it took a British impersonator to break the stalemate. Jonathan Clark does impressions of people from this century... (I never knew that I would be so excited to say that...) Not only is that significant, but the show itself is very well-crafted. The show effectively moves from one impression to the next; nice transitions, good pace, and great variety between singing and spoken impressions, as well as classic and contemporary personalities. Raised in Colchester, Essex, Jonathan ventured into the world of show business at the tender age of 16, learning quickly what it takes to be not only a fine vocal artist, but a genuine crowd pleaser. The other notable element about Jonathan is that, in him, I see that "thing." That "thing" is that undefined element that has a combination of élan, charisma, and personality. He has that thing that helps people become stars and celebrities. With that combined with his talent, Jonathan Clark really could become the next great impersonator in Las Vegas. Now of course, no impersonator does every impression to perfection...obviously some are better than others, and as far as the production goes, there was really only one choice that I didn't agree with. Toward the end of the show, he does his first "ending." As with most shows, that leaves time for a finale number. At this point, Clark comes out in full Elvis garb and does an extended routine before going to the finale number. For my taste, it was way too much, way too late. The entire routine felt as if it was forced into that spot just because he's performing in Las Vegas. The other problem is that in a town replete with truly top-notch Elvis impersonators, his Elvis comes across as weak. You're doing great, Jonathan. Keep up the good work and never stop improving your show and keeping it relevant.