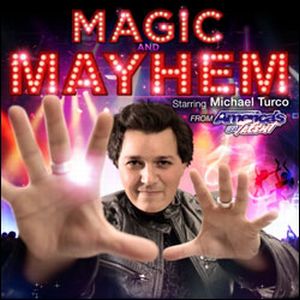 Magic and Mayhem is playing inside the Saxe Theatre at the Miracle Mile Shops in Planet Hollywood. The show stars illusionist Michael Turco with choreography from Lacey Schwimmer from "Dancing with the Stars" fame. It is being billed as "the hottest entertainment 'mashup' in the afternoon," but dancing and magic have been put together in shows for decades...and this one is not different. Sadly, it is just another magic show. I would like to say good things about this show...Michael Turco seems to be a capable talent with good presence, timing, and showmanship. He does all the right moves, he says all the right things, and he executes all of his illusions well. Unfortunately, everything in the entire show is so basic and formulaic that it's boring...not only have we seen every one of these tricks before, we've seen them ad nauseam. This is Magic 101, and it is almost insulting to see a magic show open (in the "Magic Capital of the World") at such an elementary level. This show would have played well 30 years ago. Like I said, Turco is a good and capable performer who is very personable on stage. We like him. We don't like his illusions. If I were him, I would turn in every one of the boxes he currently pushes around on stage for one illusion that was built in this century. Small children will enjoy this show. People who have never ever ever seen a magic show will enjoy this show. If you have, however, seen a magic show in the past several decades, then you will be disappointed. Even his poster looks as if it came from the 80's with his hands splayed out in front of him. Turco gained a little exposure by doing well at his audition for "America's Got Talent." He got through to the second round. We get to see the video of this performance during the show (it seems that just about everyone has one of these videos ;) what is never mentioned, however, is that he was cut in round two. The dancers in the show do a great job. The choreography by Schwimmer is very strong and allows some nice breaks in the action. Having dancers in a magic show has been the standard fare for years, so when the marketing spoke of a "fusion," a "mashup"...a new concept to bring these two elements together...I was expecting a lot more. What I got was just the same old thing...Magic 101. Someone like Michael Turco is very frustrating to me... Here is a good performer that is simply doing the wrong show. I think that he could do very well if he could step beyond the hackneyed, old, and stale tricks that he is doing. Currently, he is a magician without a signature...he is doing other people's tricks, the way other people have done them. He does not stand out. Please, Michael, find that which is unique and original. Find your signature!!